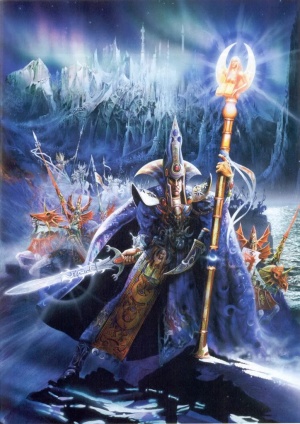 Teclis is the High Loremaster of the Tower of Hoeth and the greatest living mage amongst the High Elves in the World.

Teclis is a descendant of Astarielle, a past Everqueen, and Aenarion, the first Phoenix King, through their firstborn son Morelion. He is also, therefore, a very distant relative of both Malekith (Aenarion's second son by Morathi) and Alarielle, the current Everqueen, descended from Aenarion's daughter Yvraine, Morelion's twin.

Although born twins, Tyrion and Teclis could not have been more different. Where Tyrion grew up tall, proud and strong, Teclis was slight and always sickly. In spite of his awesome magical abilities, he required potions just to maintain his health, and suffered a limp that no amount of wizardry could entirely banish. [4a]

Tyrion became the champion and consort of the Everqueen Alarielle and the greatest living warrior of Ulthuan. Where Tyrion was an extraordinary warrior and general, Teclis made up for his weak body with a strong mind and his prodigious magical abilities.[4a]

Teclis was also extremely unusual for an Asur in that he shared the concerns of the wider world outside Ulthuan, and would sometimes lend his magical abilities in defense of the Empire or even the dwarfs. To Teclis, this was not sentimentality, but pragmatism; while some Asur were content to leave the rest of the world to its problems, and others (such as Tyrion) were occupied by the ongoing feud with the Dark Elves, Teclis knew that powers great enough to menace other nations of the world would likely become Ulthuan's problem if not stopped early.

After recieiving a plea for aid from Magnus the Pious, Finubar agreed to send Teclis with two Loremasters, Finreir and Yrtle. For this reason, he and his companions were hightly active during the Great War Against Chaos in the Old World, becoming a trusted advisor of Magnus the Pious, who later asked him to found the Colleges of Magic in Altdorf.[6a] This made him a semi-legendary figure in the Empire, often written about in history books. Teclis also invented the offshoot of Eltharin which formed the spell-language used by Imperial wizards.

After the Great War

He also led Gotrek Gurnisson and Felix Jaeger through the webway of the Old Ones to the mysterious island of Albion.

Teclis played a role in the Storm of Chaos leading detachments of Sword Masters and Sea Guards to the aid of Middenheim. Teclis managed to destroy an entire daemonic army, headed by Be'lakor, the Dark Master, with a single spell. However, he played little or no part in the lifting of the siege, due to the taunting of Volkmar the Grim, the Grand Theogonist.

Before the End Times, Teclis was quite probably the most powerful mage in all the Warhammer world. Even Malekith, the Witch King of Naggaroth, who studied magic at the feet of his fearsome mother Morathi, and honed his skills for millennia, was careful not to confront Teclis directly after the Battle of Finuval Plain, where the latter defeated him in a wizards' duel and forced him to withdraw from the field, striking a fatal blow to the Druchii's morale.[2a]