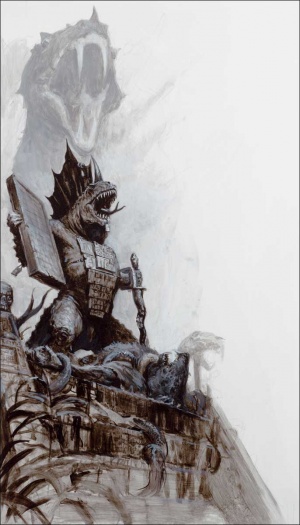 The last of the first generation Slann passed on having inscribed the Great Plan onto gold tablets, one of these would become known as the Prophecy of Sotek and was kept in the Temple-city of Chaqua. It warned of the destruction of the Polar Warp Gates and even the invasion of Lustria by the Skaven. It further stated that the god Sotek would manifest, heralded in the sky by appearance in the sky of the forked serpent. Sotek would then prevail over the ratmen. The Slann of Chaqua considered that he was a Old One who would appear at the appointed time to save his followers. [2a]

When plagues began to propagate in their city, the same Slann examined the plaque at length, sending cohorts to capture skaven for sacrifice to attract the attention of the serpent god. However the plagues swept through the ranks of the Mage Piests following the ritual and those of other cities did not understand the omens that were appearing. [2a] in the year 0 IC[4b]

Chaqua was decimated by plague and disease and Tehenhauin was hailed as a hero for his actions during the time of the Rat and The Serpent. He led the survivors of Chaqua from the city and recovered the Sacred plaques of Sotek. He then went on to become known as the Prophet of Sotek and lead the armies of the Lizardmen against the Skaven of Clan Pestilens.[1]

As Prophet he fought for more than a century against the the Skaven, winning many victories culminating in the Battle of Gwakmol Crater. So many Skaven were captured here that the columuns to the sacrfical altar took days to pass and the power of Sotek grew to course through Lustira. The Skaven finally retreated to their last stronghold, the ruins beneath Quetza. Nurglitch managed to break through the encircling Lizardmen and his army fought their way to Fuming Serpent Island. As a quarter of the Skaven were tricked into acting as a rearguard, Nurglitch and his followers took to the water in a ramshackle fleet, pursued by a avatar of Sotek. [5a]

He won a great victory at the Mal'liente Swamp[5c] and following this the Slann Mage Priests met to discuss the rise of Sotek, something that had not happened since before the Warp gates fell. [5a]

Tehenhauin is chosen to lead the attack on Slagmire in 2502 IC with the Slann transporting him and his army directly into the settlement. The war lasts three years but finally the rocket invention is destroyed. [5b]

In 5th edition he was named as Tenehuini. [4a]