From Warhammer - The Old World - Lexicanum
(Redirected from The Blue Scribes)
Jump to: navigation, search 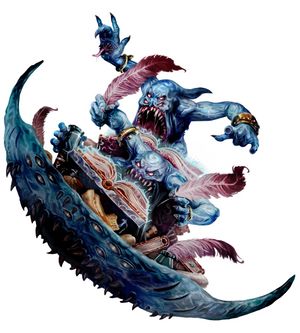 The Blue Scribes are a pair of Daemons of Tzeentch created to gather the shards of their god. [1a]

If they were ever to succeed in collecting all the lost fragments, Tzeentch would swallow them and renew itself to its full glory and power. [1a]

Legend states that Tzeentch was once the most powerful of the four Chaos Gods but the other three united against him, casting him down from the Endless Mountains and shattering him into a thousand pieces. These shards shifted to become spells of incantation and wanting to regain his power, the Great Sorcerer created two deamons and tasked them with learning every spell in existance. [1a][2a]

He needed the two Blue Horrors, P'Tarix and Xirat'p to be more self aware than other horrors, but being ever watchful of betrayal he made it so although P'tarix can write down any spell, he cannot read them and Xirat'p can read the incantations but not understand them. They were then dispatched to seek out every spell in existence and not to return until their task was complete. [1a][2a]

As Xirat'p reads the written words of his fellow deamon, he unleashes random magic on anyone or anything nearby. [1a]

The squabbling pair ride a Disc of Tzeentch, binding spells they find with parchment and ink. [1a]