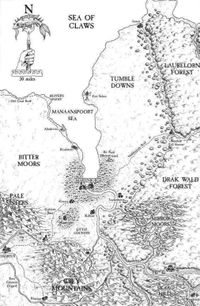 Map of the Wasteland

The Wasteland is largely a city-state, and a mercantile nation ruled by Burgomeisters. Its capital Marienburg is probably the largest city of the Old World. Located between The Empire and Bretonnia, it is de facto a buffer-state between the two. [1]

The area now known as the Wasteland was once a rich and verdant area with rich woodland and lush grasslands through which roamed vast herds of wild cattle, the auroch. Both the Elves and the Dwarfs loved the area - the Dwarfs calling it Tiwaz-Katalbuyk - Rest at Journey's End [1a] whilst their allies the elves built a great city port - Sith Rionnasc'namishathir. [1b] The Elves would also build a great white road leading inland - parts of which are still usable. [1a]

In -1997 IC the War of the Beard begins and in -1502 the city and its fortress are besieged by the Dwarfs and after a long conflict razed to the ground. [1d]

Following the departure of the elves following the War the land was devastated by the arrival of the Skaven even as the equally malignant Fimir expanded their marshland empire. Inevitably the two races went to war, unleashing increasingly deadly forces and magic until it seemed the tormented land rebelled, destroying both the Fimir Holds and the Skaven fortresses. [1a]

Since that day it has remained a mist shrouded and devastated land. [1a]

Fleeing slavery at the hand of the Teutogens, the Jutones arrived in the Wasteland in about -20 IC and immediately fought against the Fimir, with a great victory being achieved in the barely visible ruins of the old elf city, the Fimir queen being killed in single combat by the tribes leader, Marius. Marius proclaimed the area to be Jutonsryk or the Realm of the Jutones building fortifications on the islands that remained of the Elf city, his own tower being named Rykseiland or Realm's Isle. [1c]

Gijsbert Mannelykheid and his son Grootneus were some of the early Kings in the 3rd century IC. Attempts to found new settlements in the rest of the Wasteland met with little success and nothing survived on the Bitter Moors. Emperor Sigismund II battles the barbarians of the Reik's mouth in 501 IC and victorious he makes the king, Bram a Baron and Vassal of the Empire, naming the new province Westerland. [1c]

The riches of the Manaanspoort Sea is initially Marienburg's gold mine with a seemingly inexhaustible supply of fish providing a large surplus that was salted and exported. However the growing riches drew unwanted attention and Norse raiders plague the region from 632 IC onwards with the Marienburgers meeting mixed success in battling the raiders, sometimes fightng them off, other times having to bribe them to leave. Despite this, Marienburg trades more and more, reaching out to Bretonnia, Estalia, Tilea and even Albion, Cathay and Ind. [1c]

In 1507 IC Marienburg itself is seized by Bretonnian army under Duc de L'Anguille, for the next five years the citizen resist the occupation which ends when a army under Grand Duke of Middenland approaches the city. [1d]

Baron Matteus van Hoogmans seized the opportunity to create a treaty with the High Elves in 2150. IC [1c]

The last Baron of Westerland, Paulus van der Maacht, died without any heir while serving in the army of Magnus the Pious's during the Great War against Chaos in Kislev. As noble houses across the Empire clamoured to be awarded governance of the city, Marienburg quietly appointed a Directorate comprising the greatest of its Merchant Houses and Temples. The Emperor prayed on the matter and confirmed their power. [1c]

Over the next hundred years, the city would take control of its own defences, replace the Imperial 2nd Fleet with its own private naval forces and appointed their own excise service, whilst carefully maintaining the flow of coin to the Imperial treasury. Finally in the reign of Emperor Dieter IV the Directorate were able to declare independence in the chaos of his reign. [1c]

The outraged successor to Dieter, Wilhelm III sent three military expeditions against Marienburg but all three were defeated, the last resulted in a humiliating surrender of the Imperial Army at the Battle of the Grootscher Marsh. The subsequent treaty of 2429 IC confirmed the status of the region.[1c]