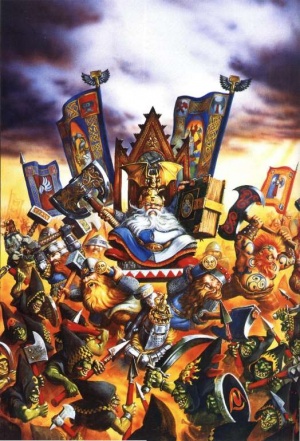 Thorgrim Grudgebearer is the current High King of the Dwarfs. [1a]

Thorgrim is the descendant of the most ancient and noble of all Dwarf lords. The very blood of Grungni flows in his veins and the wisdom of Valaya sits upon his beetling brow.

He is the son of the previous High King Alriksson's sister. [1a]

The High Kings have kept the Great Book of Grudges, the oldest and most important of the many Books of Grudges that exist throughout the Dwarf realms. This book, known as Dammaz Kron, recounts all the ancient wrongs and deeds of treachery perpetrated against the Dwarf race. its pages are written in the blood of High Kings, and its tattered parchment is much thumbed and studied.

The Book is Thorgrim's constant companion. He keeps the book by his side night and day, sleeping with its gnarled old pages beneath his pillow, and carrying it about with him in his waking hours. He has managed to strike our several long-held grudges, including winning recompense of 1,000 gold pieces from the Burgomeister of Altdorf for damage done to the reputation of Borin Bullroarer during the Great Altdorf Stampede.

Occasionally, the Dwarfs have the opportunity to set right some ancient wrong, in which case the high King has the satisfaction of striking out the record in the book. This hardly ever happens as, when it comes down to it, Dwarfs much prefer to hold a grudge rather than let bygones be bygones. Even grudges which have been crossed our can still be read and are never forgotten, but fondly recalled together with the story of how vengeance was finally exacted. Dwarfs are very good at bearing grudges, and Dammaz Kron recounts many episodes of the infamy of other races and of the gods themselves. The Dwarf language has no word for forgiveness, but many subtle variations on revenge, recompense and retribution.

When Thorgrirn goes to war (which is often, for there are many dark deeds of infamy to avenge!) he carries the Great Book of Grudges with him. He is borne aloft on the Throne of Power by his four sturdy Thronebearers, and brandishes aloft the Axe of Grimnir. Atop his brow he wears the Crown of Karaz­-a-Karak. [3b]

Since an early age, Thorgrim has dreamed of avenging his people and perhaps, one day, to put aside the Great Book of Grudges by striking out every single grudge it contains. Such a thing would be impossible even in a thousand lifetimes, but Dwarfs are a determined folk and once their mind is made up they are obstinate.

He campaigned in Norsca with the Norse Dwarfs, re-establishing ties with them and even entering several of the Lost Holds to gather and return lost artefacts including the Golden Sceptre of Norgrim.[1a]

When High King Alriksson returned from the Great War against Chaos he had suffered various wounds that would not fully heal and called a Council of Kings to decide the succession. Although many present were impressed by Buregar of the Angrund Clan and Ungrim Ironfist, it was Thorgrim whose deeds and words led to him being aclaimed as the next High King. His final task achieved, Alriksson passed away. [1a]

Together with King Alrik Ranulfsson of Karak Hirn he slaughtered the greenskins plaguing Black Fire Pass, the two kings meeting at the heart of the battle, surrounded by dead orcs and goblins. [1a]

He rallied the clans to aid Belegar Ironhammer in his latest attempt to retake Karak Eight Peaks, having new Rune weapons forged for him by Thorek Ironbrow of Karak Azul who also joined the throng assaulting the lost hold. [1a]

Thorgrim led the Throng with that of Ungrim Ironfist to the aid of Zhufbar when it was attacked by Goblins, quickly slaughtering the invaders. However the greenskins had been fleeing a bigger threat - an Ogre army commanded by the Tyrant Browl Lumphammer. Together with an army from Nuln with a huge artillery train, they destroyed the horde. [1a]

For over four thousand years, the Dwarf High Kings have been carried into battle on the Throne of Power. The throne is an ancient wonder and an astounding piece of craftsmanship, a marvel amongst the Dwarfs. The throne normally resides in the cavernous throne room of Karaz-a-Karak, raised upon a massive pedestal of polished stone. Those who would seek an audience with the High King must climb a night of steep steps as the Dwarf Lord stares down at them imperiously from the massive throne.

Tradition dictates that whenever the King sits down, he must do so on his Throne of Power. To this end, the throne is continually carried around after him as he goes about his daily business. This can be extremely inconvenient, but the Dwarfs are great traditionalists and the High King must be seen to uphold the ancient ways. The throne is borne aloft by four strapping Dwarfs called the Thronebearers. It is a great honour for a Dwarf to be a Thronebearer, for they are also the High King's bodyguard. They follow him all day, and stand by his side wherever he goes. When he is ready to sit they bring his throne for him. When he no longer wishes to walk, they carry him aloft on the throne itself. Only the fittest and strongest Dwarfs are up to this daunting task, and the Thronebearers train rigorously every day. Most of their training involves drinking vast quantities of nutritious Dwarf ale to build up their strength.

The Thronebearcrs swear a binding oath never to abandon their Lord, and to give their own lives to protect him. Dwarfs take this sort of thing extremely seriously, and to break such an oath would bring lasting dishonour to the oathbreaker's family, descendants and ancestors. ln all of Dwarf history there is only one recorded occasion when a Thronebearer, Forkhelm Shiverback, abandoned the High King in battle. His entire family subsequently left Karaz-a-Karak and wandered eastward into the Dark Lands never to return. This terrible shame is not something Dwarfs ever talk about.

It is said that the Throne of Power was made by Grungni himself and mat while it endures the Dwarf race will also endure, but should it ever be destroyed then the Dwarf race will be doomed. The throne is inscribed with the great rune Azamar, the unique rune of eternity - a rune so potent that only one of it can ever exist.