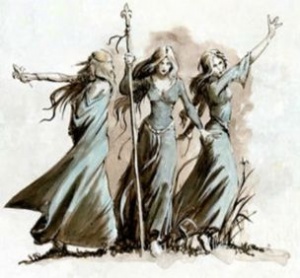 The Three Sisters of Ancelioux.

The Three Sisters of Ancelious were a trio of beautiful Grail Damsels in service to the Lady of the Lake.

It is a rare and sad honour to have three daughters chosen by the Fay Enchantress, as Evroul of Mousillon did. The first, Jevena, was taken a week before her tenth birthday; the second, Alisse, when only five years old. Distraught at losing another child to the Lady's service, Evroul's wife fled their castle with their youngest child, Guerrite, who had seen but two summers at that point. The wife was found two days later, slain by some wild beast – of Guerrite, there was no sign. Evroul did not see his daughters for some ten years after Guerrite's disappearance – not until the Lady sent them to kill him for siding with Mallobaude in the civil war.

The Three Sisters fought during the End Times, during a battle against the Undead hordes of Heinrich Kemmler they attempted to thwart his Necromancy, but were ultimately slain by the Lichemaster. Like all other Grail Knights and Damsels, their spirits would be transported to a new world, part of Lileath's plan to preserve humanity.