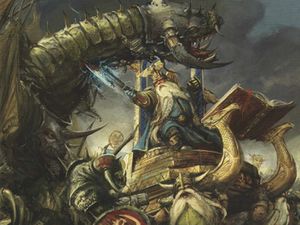 Throne of Power at war

The Throne of Power is an ancient Dwarf artefact said to be created by Grungni himself. [1a]

In -4421 IC, year 102 by the reckoning of the Dwarfs, Grungni makes the throne and gifts it to his eldest son Snorri Whitebeard.[1b]

All the Dwarf High Kings since the first one, Snorri have sat upon it. [1a]

Over the thousands of years that the Throne has been carried to war, it has only received a few minor dents from the most powerful of foes - Dragons and Greater Daemons. [1a]

It normally resides in the Great Hall in Karaz-a-Karak upon a vast pedestal so that petetioners must climb up a flight of steps whilst the king looks down them. [1a]

A high King travels to war upon the throne, carried by four Thronebearers - strapping Dwarf bodyguards. Atop the deck, the High King wields his weapons to deadly effect, knowing that the throne is virtually impervious to harm. [1a]