From Warhammer - The Old World - Lexicanum
(Redirected from Throt the Unclean)
Jump to: navigation, search 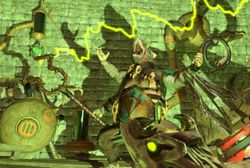 Throt the Unclean is a Master Moulder [3a] and one of the most powerful and influential members of Clan Moulder. [2a]

Like most of his brethren, Throt has endured extended contact with warpstone. As such, spines have grown from his back, he has gained an extra arm, and warp-magic courses through his body just as its blood does which has unnaturally extended his life. Now one of the oldest members of Clan Moulder many generations of Skaven have come from Throt, having birthed literally thousands of offspring Throt is seen as some what of a Patriarch to the wealthy Clan.

Not only did Throt's life get extended by his over exposure to warpstone but he has also gained great strength and he can pin even the most ferocious Rat Ogre to the ground with his Creature-killer. The drawback to this is his constant need to eat, lest the warpstone magic fuelling his body and its regenerative abilities ultimately destroys him. Throt's clothes are therefore filled with small animals he uses as foodstuffs to sate his incredible hunger.[3a]

He often creates Throtlings out of habit and Rat Riders are deployed in his experimental armies.

One of his greatest successes but one he regrets is the melding of the former champion of Khorne, Ghoritch with a Rat Ogre [3b] and now Lord Verminkin has demanded that he create many more. [3a]

In addition to his third arm in a struggle with another Packmaster he lost an eye, which was replaced with a crude piece of warpstone, hammered into his skull to feed power directly to his brain; making him look even weirder.[2a]

In 2491 IC, following the theft of the Black Arc from Skavenblight by Bagrian, he was part of the force dispatched under Grey Seer Gnawdoom to retrieve it - which led to the Battle of La Maisontaal which he barely survived. Following the battle, he is rumoured to have hired assassins from Clan Eshin to get his own vengeance on Gnawdoom who had fled the field with the Black Ark. [1a]