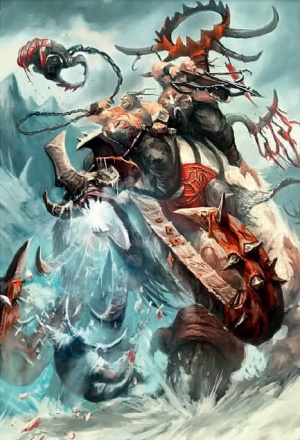 A Thundertusk blasting it's enemies with icy breath

Thundertusks are huge primeval beasts native to the Mountains of Mourn. They are often ridden to war by the Ogres of the Ogre Kingdoms, and are strongly associated with snow, ice and cold weather.[2a]

Thundertusks are creatures of ice and doom, ancient monsters that strode the darkest ages long ago, when the world was frozen over. Retreating from the sudden warming of the sun, the forefathers of these mammoth beast headed to the northern plains where they became saturated in the magic that was unleashed in those strange lands. Imbued by those unnatural winds, the Thundertusks became living embodiments of cruel and ever-enduring winter, primordial things from a long-forgotten past. Their hulking mass exudes an aura, a subzero blast of arctic air so cold it congeals blood and freeze their prey. Thundertusks advance as relentlessly as a winter storm, using their numbing airs to slow their victims down, allowing the beasts to bring their cumbersome but crushing mass to bear. [1a][2a]

Thundertusks are solitary wanderers that travel across the cold places of the world, far to the north or high amidst the frozen peaks of the mountains. Needing a great deal of sustenance to sustain their bulk and icy nimbus, they are constantly roaming in search of fresh meat. But the Thundertusk is not just deadly up close, where it can stomp its frozen foes flat. A Thundertusk's horns attract the elemental power of magic like a Lightning conductor. The beast's icy breath mixes with this sorcerous flux, coalescing into swirling spheres of eldritch energy and jagged shards of ice. With a sound akin to the peal of a thunderclap, the Thundertusk can hurl these frozen orbs across the battlefield. Upon impact, the glowing sphere of frost shatters, sending lightning-wreathed icicles spinning through the air. The shards scythe into any exposed flesh, cutting bloody holes into anything within a wide radius. [2a]

Because of its unnatural penchant for frost, Thundertusks become extremely irritable and uncomfortable in direct sunshine. Shedding patches of skin and cultivating coats of icicles upon their pelt can only compensate so much, and so the Thundertusk has developed a unique mechanism for surviving the heat during the relentless fairer seasons when the temperatures rise slightly above freezing. During any prolonged warm spell, a Thundertusk will hibernate within its chosen glacier, hacking and carving out a crude cave with its gigantic blade-edged tusks until it can retreat from the punishing rays of the sun. [2a]

There, in a cocoon of ice, the beast will slow its heartbeat and lower its body temperature further still, allowing the Thundertusk' freezing breath to slowly crystallise the moisture until the beast is completely surrounded in cooling ice. Safe from the predation of the beasts and Ogre tribes of the mountains, the Thundertusk sleeps through the summer in its frozen refuge, healing the damage it sustained during mating season and slowly digesting the massive quantities of meat that it gorges upon before each hibernation period. [2a]

When the days begin to shorten and the warmth of the sun retreats once again, the Thundertusk will gradually raise its heartbeat and exert maximum effort upon the glacier around it. Eventually, through sheer brawn, and with numerous shifts of its massive shoulders and muscular haunches, the Thundertusk will burst free in a shower of ice shards and roar its victory over the sun. Hungry beyond measure, it will rampage over the mountainsides generating a shimmering chill that numbs the air. Thundertusks use their great tusks to scoop up any living creatures they can find, tossing them into the air and catching them in their blunt maws to devour. [2a]

When they meet on the mountainous slopes, Ogres and Thundertusks eye each other warily - for a strong meat­ gathering party or a highly skilled Hunter are some of the few predators that can actually bring down such a beast. A slain Thundertusk is a great boon to a hungry Ogre tribe, but slaying one is no easy business - Thundertusks are known to crush, gouge and freeze their way through most attacks. Just occasionally, though, a tribe will manage to bring low an injured Thundertusk and, by the use of iron chains the thickness of an Ogre's forearm, tout clubs and copious quantities of red meat, they can train the beast. [2a]

Captured Thundertusks are kept in chains and dragged about for a long time, but can eventually coexist alongside the Ogre tribes and can even be broken in to permit a few riders to sit upon their enormously broad shoulders. Thus a Thundertusk will join a tribe, becoming a living engine of frozen destruction. These massive mounts give the Ogres that ride them an extra twenty tons of brute force to smash things with, an excellent view of the battlefield, and also an ice-cold, walking larder with which to keep their meat fresh. [2a]

In battle, Thundertusks are used to blast the foe with ranged attacks and to lend support to the main Ogre battle line. Towering high above the heads of all but the tallest combatants, the Thundertusk and its crew unleash a hail of fire even as they advance upon the foe. A Thundertusk will often aim to crash into the enemy lines at the same time as the bulk of the Ogre attack, supporting their bone­ crunching charge with its own chilling aura of frozen doom. [2a]

A Thundertusk was captured and became part of the Imperial Menagerie in Altdorf but whilst it was docile and sickly in the summer, it came to the life in the winter, froze and shattered its walls and headed north out of the city. [1a]

Thundertusks are protected by a furry, thick hide whilst some have deadly icy breath or a spiked tail. [1a]