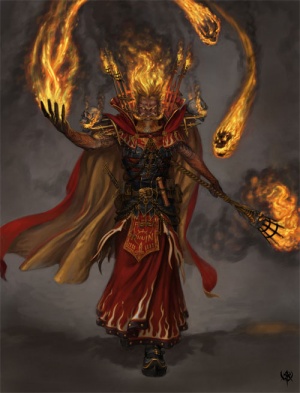 Thyrus Gormann former Supreme Patriarch of the Colleges of Magic.

Thyrus Gormann is a well-known wizard and Patriarch of the Bright Order who was once the Supreme Patriarch until he was challenged and defeated by Balthasar Gelt of the Gold Order.[2][3]

He is a peerless artificer, having learned forging techniques rarely mastered beyond the Gold Order. [5a]

Thyrus created the Nordwald Citadel where the Imperial army and battle wizards train together. [5a]

He led the Imperial contingent that explored the realm of Albion when the mists hiding that isle abated for a short while. During the End Times, he disappeared under mysterious circumstances.[4]

His exposure to the harsh wind of Aqshy’s has left its mark him, making him difficult and intemperate despite his extensive learning and vast wisdom. Whilst Karl Franz welcomes him at court, his dark moods and flashes of violent rage mean that many envoys and stewards have come to fear him. In addiiton the singeing of the Bretonnian Ambassador Etienne Edouarde Villechaize, Comte de la Rougierre’s beard nearly caused a diplomatic incident. [5a]