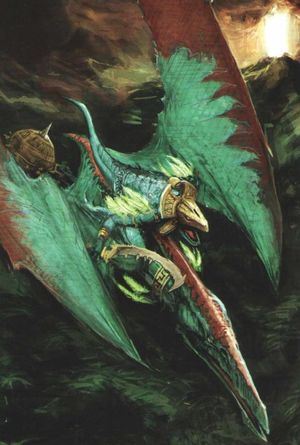 Tiktaq'to is the Master of Skies of Hexoatl, a very important position for Skink Chiefs.

He is an exceptionally talented strategist, commanding the Lizardmen defenders during the Siege of Hexoatl and holding off the forces of Vashnaar the Tormentor for 63 days before reinforcements arrived.[1a][1b][2a]

For many years Tiktaq'to has led his sky patrols of Terradon Riders. He has never engaged a foe that he hasn't defeated, knowing by instinct when to fight and when to err on the side of caution. When he does engage prey he dispatches them with ruthless efficiency, sending riders around the enemy flanks to encircle and destroy them.[1b]

In battle Tiktaq'to rides his Terradon Zwup, who can fly higher than any other Terradon. Whilst wearing the Mask of Heavens, Tiktaq'to joins his mind with that of his mount, the two entities acting as one, in perfect harmony. From far above the battlefield, the Skink Chief directs his troops. His riders swoop down upon the enemy soldiers, dodging missile fire with spectacular aerial manoeuvres. Tiktaq'to himself eviscerates his foes with the Blade of Ancient Skies, a weapon made from the fossilised jawbone of a long extinct aerial predator.[1b]