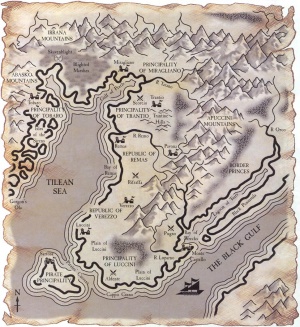 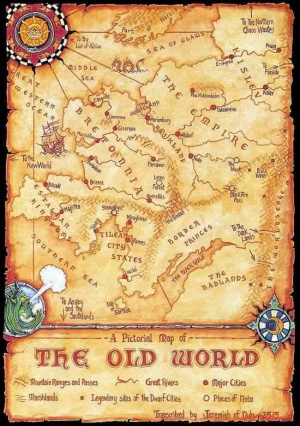 Situated in the south-western part of the Old World (lower left corner). 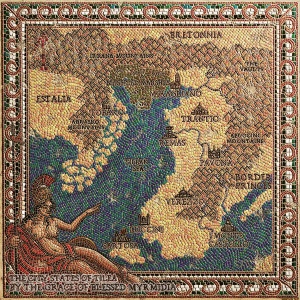 Tilea is a nation of the Old World, lacking a central government. Sharing a common language and culture it is politically divided in several city-states.

The city states have varying forms of government - some are republics while others were principalities.

Tilea is (in)famous for its mercenaries or Dogs of War and although Men were the most common, but Dwarfs, High Elves and Ogres were also employed in the armies of the Merchant Princes.

The Apuccinis protect Tilea from the lawless region of the Border Princes, but the forests of the foothills are dangerous enough, harbouring predatory beasts with Goblins and bandits also being a pervasive threat.

The coastal states are important maritime powers which struggle with the Arabians and Estalians for dominance of the sea trade. Although Tilea was distinguished by the rivalry between its city states, the recognition of a common heritage ensures that they usually cooperate against common enemies. The inland states are mostly concerned with agriculture and sometimes subservient in some way to the coastal states.

In 1699 IC the merchants, Ricco and Robbio convinced the various princes of Tilea to finance an expedition to the east to find Lustria and hopefully even Ulthuan and the source of silk. A huge mercenary military force accompanied them and it attracted a large contingent of slayers who considered the whole thing doomed but for years nothing was heard of them. Then in 1714 IC, a caravan with pack mules laded with silk arrived in Verezzo accompanied by a message from the brothers who were residing in the previously unknown empire of Cathay. They had set up a trading enclave in the western most city of Shang-Yang and subsequnetly opened up a trade route which became known as the Silk Road. [3a]

During the early stages of the End Times, Tilea was invaded and completely overrun by Skaven.[1]

Tilea had no regular military, and all city states employed companies of mercenaries instead. The companies ranged from groups of hardened, professional soldiers who would honourably fulfill the terms of their contract to the letter, to unscrupulous rabble all too prone to rebellion, plundering, and treachery.

Tilea is renowned for its wines and the various city states have many merchants and fleets of ships to faciliate trade or to explore new lands in search of riches or commerce. [2a]

All dates given in the Sigmarite Calendar.

The Dogs of War army in Warhammer Fantasy represented the armies of the various Merchant Princes and was comprised entirely of hired mercenaries.