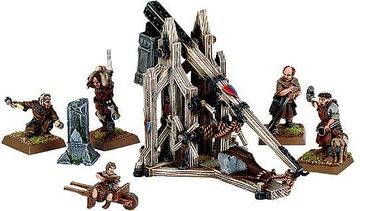 Trebuchets or Field Trebuchets are immense wooden-structured war machines, used by the armies of the Bretonnians. Through a series of levers, cogs and winding mechanisms, the large arm of the trebuchet is drawn down into a firing position, with immense masonry counterweights attached to the other end. A large sling is attached to the arm of the trebuchet that can hold rocks, masonry or even dead cattle. When the trebuchet is fired, the extra impetus that the sling adds to the firing arm means that it can fire further and with more power than a regular catapult.

The trebuchet is an essential piece of equipment when the Bretonnians engage in siege warfare, and smaller versions of these machines are sometimes deployed on the field of battle. Since the king himself commissioned a number of trebuchets to be built to act in the defence of Couronne, their popularity has increased. Still, most knights universally put on a show of disdain towards them, and some dukes refuse to make use of them at all. Nevertheless, it is a sign of particular opulence to be in possession of a trebuchet, for they are time consuming to create and are individually hand crafted. There are only a finite number of craftsmen within Bretonnia with the skill to create them, and their services are highly sought after. Although a knight would never stoop so low as to operate a missile weapon himself, let alone a war machine. That is not to say that he could not grudgingly see the strategic worth of it, and therefor allows his low-born servants to use them.

The first Bretonnian trebuchet is believed to have been constructed in the small village of D'Ason, on the north coast of Lyonesse. It is said that an eccentric bastard child, a pious young man prone to fits and visions, built the war machine in a single night of feverish activity. Using parts of the crumbling, Grail Chapel of Adelhard the Second, as well as pieces scrounged from various other sources. When the village was attacked by northern raiders, it was this construction that fended them off, firing massive chunks of masonry to sink the marauders' longships.

The young man was later presented to the king, and his designs copied and improved upon. For saving the village and maintaining the purity of the Grail chapel (though it was now even more ruinous than before), the young man was gifted with a fatted pig and two copper crowns - more wealth than he could have hoped to see in a lifetime.[1]

These are even mightier than the basic kind. A Blessed Field Trebuchet hurls thrice-blessed stones at the enemy, crushing them with devout fury.