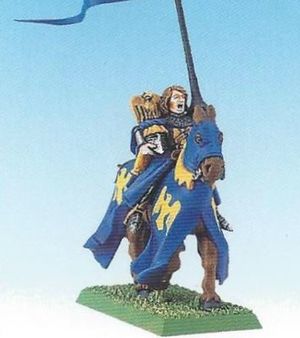 Tristan le Troubadour was a Questing Knight from Gisoreux in Bretonnia. He was known to give courage to his fellow knights by singing magical songs of noble valour. Tristan was always accompanied on his journeys by his jester, Jules le Jongleur.

In Pursuit of a Traitor

The presence of Tristan the Troubadour at the battle of Montfort was due solely to a vision he received from the Lady of the Lake. She came to him and told him of Sir Artrenic of Fandramanc, a treacherous knight who had sold his loyalty to the spymasters of the neighbouring Sigmarite Empire. In his possession Artrenic had certain documents that could be used to sow great division amongst the noble houses of Bretonnia and weaken the realm for years to come. The blessed lady directed the knight to find Artrenic near to the town of Montfort, where the Duke of Montfort would soon be forced to muster his men to repel an attack by the Imperial general Magnus Von Abresicht.

So it was that Tristan and his ever-present shadow, Jules the Jester arrived at the height of the battle, an epic struggle still in the balance where either side could claim victory, halfway between dawn and noon. Atop a shallow hill cowardly Empire cannons pounded at the knights and peasants of the Bretonnian lines, carving great furrows through horse, man and soil with every shot. In the centre of the field knightly warriors of both realms clashed, whilst yeomen and peasants vied with the huntsmen and free companies about their flanks. A thousand men or more had already been lost to death's icy embrace, Imperial General Von Abresicht amongst them, and yet the fire of battle still burnt strongly, seeking to consume all.

Joining with a dozen of his fellow Questing Knights, the Troubadour fought like a man possessed that day, for Sir Artrenic could clearly be seen fighting in the ranks of the foe, and Tristan was determined to reach him. No enemy – whether militiaman, engineer, or knight – could prevail against the burning, righteous fury that consumed Tristan. By noon he could sing no more, for his voice was made weary by his efforts. His lance and sword were slicked in blood, whilst his horse's caparison was heavy with it. He himself was wounded in a dozen places, yet still he rode on to fresh opponents. Alas, each time he came close to Artrenic, the tide of battle conspired to carry Tristan away from his quarry once again, for Artrenic fought like a mad man, and perhaps he was.

So the battle continued for many long hours, both sides drawing upon reserves of energy and courage whose existence few men would credit. By the time dusk fell, the ground about Montfort was choked with blood and the screams of the wounded threatened to eclipse the last sounds of the dying battle. Only when reinforcements from Parravon arrived, the Duke himself riding at the head of his household knights, did the conflict finally find resolution. The remaining Imperial forces, hard-pressed by the foes they had fought all day, could not contain these new arrivals and began a weary retreat into Axe Bite Pass.

As the Empire lines crumbled, Sir Artrenic left with the retreating army. Tristan was furious, for not only had his foe escaped, but he had lost his own steed and knew that he would lose further precious hours trying to replace it. Knowing he would need help to avoid falling prey to the rearguard of the Imperial army, Tristan sought to petition the Duke of Montfort, but the nobleman had been wounded early in the battle and was hovering between life and death. The Duke of Parravon was nowhere to be found and his retainers would not act without word from him. Fortunately, as Tristan recounted his tale, several of the knights who had fought at his side volunteered to accompany his pursuit. Forcefully dragging a disappointed Jules away from the corpses he was busy looting, Tristan set off once more in search of the traitorous knight.

For two days Tristan and his fellows rode deep into Axe Bite Pass. Despite their exhaustion, they halted only when their steeds could travel no further, for they could little afford for their quarry to increase his lead. All about them as they rode were the discarded weapons of the army that had passed that way, halberds, arquebuses and even cannons abandoned as the shattered Empire army wound its way back across the pass. At the foot of Mount Bestanroc the route was choked with corpses and awash with the blood of Bretonnian and Reiklander alike, evidence of a vicious battle between Von Abresicht's rearguard and the pursuing Yeomen and Knights Errant, In all this time no sign was to be seen of Artrenic, and even Tristan's high spirits began to fail.

At noon on the third day, just as Tristan and his fellows were on the brink of abandoning their pursuit, Jules, perched behind Tristan, caught sight of the renegade knight they pursued. Moments later he vanished out of sight once more, concealed by a rise in the terrain. Their hope renewed, the Questing Knights spurred forward with fresh vigour, for Artrenic was no more than two or three miles ahead, and his steed could have been no less tired than those of his pursuers. As they crested the rise, their hope was quashed once more, In front of them, between the shoulders of the mountains that bracketed the path, nestled the rearguard of Von Abresicht's army, formed for battle with the traitor knight secure within their ranks. It seemed that Tristan's quest was over, for against the scores of handgunners and halberdiers that awaited them a dozen of Bretonnia's warriors could not hope to emerge victorious.

It was in that moment that fate capriciously changed direction once more – or possibly the Lady of the Lake, taking pity on Tristan's plight, intervened – for coming back down the pass, from the direction of the Reiklands, rode a troop of Knights Errant who had somehow found themselves between the rearguard and their destination. Curious though this occurrence was, it did nothing to assuage Tristan's sense of failure. Even with these new arrivals to aid them, Tristan's knights could not hope to defeat the Reikldanders and cut their way to Artrenic. No sooner had these thoughts touched his mind when a great cry went up from the Knights Errant. Without apparent regard for the odds against them, the unblooded knights spurred forwards toward their foe. Possibly they knew not the futility of their cause, though it was equally possible that they did not care, so frustrated were they by the long days of pursuit. Whatever the cause, honour dictated that Tristan and his companions could not stand idly by, even though the charge of the foolhardy Knights Errant was almost certainly a doomed one. Without a single word spoken, the Questing Knights lowered their helms and headed towards the foe.

What followed next is now celebrated in song and tale across the length and breadth of Bretonnia. Scarce two-score knights, riding against four times their number, Tristan and his companions should have been slaughtered to a man. It is true that many did fall, plucked from their saddles by cowardly pistols and arquebuses as they charged home, and others were trampled in the death throes of their own steeds. Yet as the blades and lances of the knights bit into the enemy line, the bristling tips of halberds and spears were cast to the ground and the enemy began to run, fearful of the howling madmen who seemingly cared not for rashness of their attack. In an eye-blink, Tristan's charge was transformed from an act of desperate hope to a shattering victory; a fact not lost on his quarry, Artrenic, who now turned to flee.

Seeing Tristan fighting his way towards him, Artrenic abandoned his efforts to force his way through the press of fleeing men. Whether he did so because some last vestigial stirrings of honour in his heart convinced him to meet Tristan in fair contest, or simply because he thought he would be free of pursuit with Tristan's death, will never be known. In truth Artrenic never had much hope against Tristan, for the blessing of the Lady was on the troubadour and, despite the long and tiring ride, he wielded his sword with the inevitability of justice whose time had at last come. With Tristan's fourth blow, Artrenic's helm and skull were split in twain.

As the other knights harried and pursued the fleeing Empire, Tristan retrieved the documents he had travelled so far to find from Artrenic's corpse and burnt them to ashes without ever glancing at their contents. Artrenic himself he cut into a dozen pieces, that he cast to the carrion birds who were already feasting well upon the day's carnage. Tristan's duty was done, and his quest could now continue

It was during the End Times that Tristan would meet his demise. Tristan led the Bretonnian armies defending Bastonne alongside Duke Bohemond Beastslayer. Fighting valiantly in defence of his land, Tristan's heroic voice was silenced forever by the slash of a crude axe.