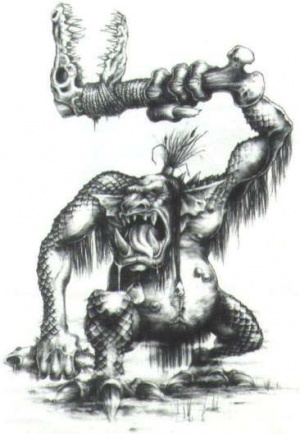 Trolls are huge humanoid monsters, as witlessly stupid as they are bone-crushingly powerful.

They commonly join marauding Greenskin armies. Trolls are found in greatest numbers in the Troll Country and other Chaos-saturated regions near the Chaos Wastes. Trolls are by nature creatures of Chaos, the corrupting effects of Chaos playing a primary role in their origins. It was once believed Trolls and Ogres were related creatures, and that Trolls were in essence a further degeneration of the Ogre race.

Trolls are voracious creatures, mostly motivated by food and eating, and appropriately, their digestive systems can cope with almost anything, including, it is rumoured, rock and metal. Trolls are infamous for several abilities. Their digestive juices are among the most corrosive acids known in the Old World, and disembowelling a Troll can often result in the death of the attacker himself as the acid sprays out. Secondly, Trolls possess an uncanny ability of quickly regenerating even the most grievous wounds. In due time almost all wounds will be healed, the only known weakness being fire. [6a]

Trolls sometimes make use of weapons, although they are more than capable of ripping someone apart with their bare hands and claws.[6a]

As a race they are remarkably stupid, unless hungry they will simply sit and stare or wander aimlessly for days. They can even vomit their brutal digestive juices onto enemies.[6a]

Besides the bog standard common troll, there are a number of distinct breeds: