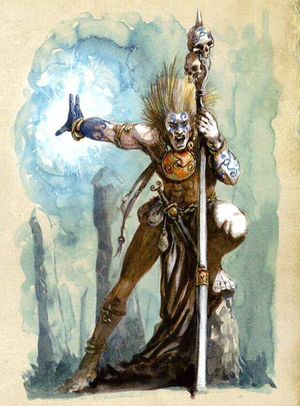 Truthsayers are the special breed of Druids, native to Albion, that lead the tribes of human Barbarians and have some control over the Giants of Albion.

Truthsayers are strange people, red haired, muscular individuals with spiralling blue tattoos and their mystical rods of command, inscribed with ogham signs. Their symbol of power is the Triskele and they use their complete own lore of Magic.

In opposition to the the degenerate humans on the misty island, they are able and skilled magic users that try to protect the artifacts of the Old Ones. Some times they utilise the Giants to move some of the large and heavy Ogham Stones following their visions of fulfilling the Great Plan of the Old Ones.

When the Daemon Prince Be'lakor started to materialise in the Citadel of Lead on the island of Albion in his incarnation as the Dark Master, he corrupted some of the Truthsayers to help him. Those corrupt individuals became his Dark Emissaries‎. They tried to weaken the power in the Stone circles and Ogham Stones, that bound the Winds of Magic and kept Chaos at bay, to help Be'lakor to get a corporal form again. They travelled to the Old World to look for evil, unscrupulous, or at least greedy individuals that would help their Dark Master.

The uncorrupted Truthsayers also travelled around the Old World, looking for brave and trustworthy allies to stop their fallen brethren and Be'lakor. Fleets of adventurers and conquerors of all races set sail to the shores of Albion, while the mist and swirling fog around the island vanished, and the events of the Shadows over Albion took place.

Truthsayers as well as Dark Emissaries used their unique magical power, to summon Fen Beasts from the swamps and Fens to do their bidding and help their allies. - At least the Truthsayers and the Forces of Order won. The armies of evil attacked the Dark Emissaries as well as each other. In fact, the most of them believed that they had been cheated. The Dark Master was forced to flee from Albion, while the mist around the islands was rebuilt by the Slann.

In the aftermath of the events of the Shadows over Albion the surviving Truthsayers followed their fallen brethren that fled from Albion to hunt them and track them down. So they travelled all around the Warhammer world and sold their services as Dogs of War to the local leaders of men, High Elves, Wood Elves, Dwarfs, Lizardmen and sometimes even to the Orcs and Goblins or Tomb Kings of Khemri. [3a]

A Truthsayer knows several of the following spells: Blessing of Valour, Boon of Courage,[2b] Elemental Power, [2c] Gift of Life, Light of Battle, Voice of Command and Wings of Fate. [2b] They use magic from the Lore of Beasts or the Lore of Life and may always take the Transformation of Kadon. [3a]

The symbol of a Truthsayer is a Triskele which focuses postive energy. [2b]