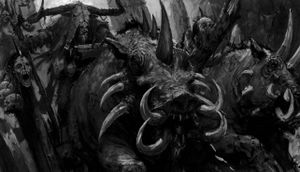 As its name suggests, it is drawn by a pair of corrupted Tuskgors, having a Gor at the reins and a Bestigor behind him. It is prized for its mobility, being quite fast and reliable (unlike the ever-drunk Centigors). Like all chariots, it is devastating in assault, crashing into the regiment and grinding beneath the wheels anyone in its path, while the Bestigor's axe easily cleaves enemies apart, supported by the Gor's spear. The Tuskgors are not to be underestimated either, as their strength is much higher than that of a human, enabling them to literally rip bodies apart. Finally, both them and the crew can sometimes lapse into the unrestricted fury, brutally slaughtering their foes, the latter's parries useless in the face of animalistic fury.[1]

Beastmen also have much respect for the protection it offers, the stout planks of wood holding on in the face of many blows, allowing the crew to outlive many of their hoof-slogging brethren. In fact, Bray Shamans and Beastlords often grace them with their presence, the famed Beastlord Gorthor never leaving its confines on the battlefield. This isn't unusual amongst Beastmen in any way, as the chariot "is not rare." While the Beastmen cannot yet rival the chariot fleets of the Tomb Kings, they can build them quickly enough to have "entire armies" of them, spelling much sorrow for the civilised races.[2]