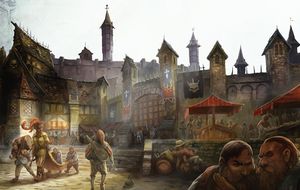 The city can be found in the Grey Mountains and guards Grey Lady Pass which is part of a trade route between the Empire, the Dwarf Holds and Bretonnia.[1a]

As related by scholars of Karak Azgaraz, the town began in about -500 IC as a Unberogen settlement called übersreichdorf (Over Reichsdorf) the rival to the settlement, Reichsdorf that would eventually become Altdorf. Built on the river Teufel, it used the waterway and nearby Dwarf holds for trade and protection. The first temple to the Man-God Sigmar is created in 82 IC, only the third temple to the founder of the Empire - it is consecrated by the first ever Grand Theogonist, Johann Helstrum. [1a]

The Junge Frewida, a branch of the Frewida Clan of the Unberogens gbecome leaders in the growing town, later known as House Jungfreud and in 197 IC Odalrich von Jungefrewida becomes Herizogo or Duke. By 828 IC the population was about 10,000 and large enough for the High King of Karak Azgaraz to open diplomatic relations, monitoring the growing settlement. Through the years 1111-1115 IC, the Black Plague strikes the town, as it does throughout the Empire with only a few hundred surviving, amongst them are the Jungefreuds who retreat to a stronghold in the mountains. Skaven sack the town in 1121 IC and it becomes a stronghold for the ratmen. [1a]

Mandred Skavenslayer liberates the ruins but it is not for nearly a hundred years that the town is rebuilt with aid from Karak Azgaraz who even install an extensive sewer system. The Bruner family take the reigns of leadership. In 1681 IC the dead rise and population is halved and the ruling Duke Lambert von Bruner commands the cult of Morr to re-site its gardens outside the city. [1a]

Orcs besiege the town in 1707 IC, with dwarf forces from Azgaraz unable to break through before the Ubersreik is destroyed - shortly after Karak Branar also falls victim to the greenskins. Black Rock Castle is built in 1714 IC on the ruins by the Bruners. The Bruner family attends a feast at Castle Drachenfels with the other great families of Reikland - none survive the hospitality of the Great Enchanter. House Jungfreud returns and reclaims the ruins and castle in 1940 IC. [1a]

In 2012 IC Duke Wiprecht von Walfen claims the town, his family having married into the Bruners and besieges what he considers his birthright forcing the Jungfreud's to swear fealty to him. The Duke will later go onto become King of Suden Vorbergland. Vlad von Carstein attacks and sacks the city in 2049 IC during the First of the Vampire Wars. The town is sacked again during the third war but this time by the armies of the Duc of Parravon, although Castle Black Rock is not taken. [1a]

Following the opening of a warp rift at Castle Dracenfels, daemons slaughter many in the town, dropping the population from 15,000 to about 1500. A century later, the army of the town are taken by Magnus Bildhofen as he fights Chaos in Kislev, whilst they are away, orcs again invade and sack the town. King Zaladrin of Azgaraz offers to rebuild it once again following a meeting with the Emperor. He will later broker a peace between the town and Parravon after border warfare breaks out in the area. [1a]

Further wars with both Parravon and orcs deplete the population and in 2474 IC Duc Gaston of Parravon sacks the city.[1a]

in 2512 IC the Emperor Karl-Franz seizes Ubersreik with an Imperial Herald, Emmanuelle Nacht representing him in the town. Graf Sigismund of House Jungfreud flees with hundreds of supporters. [1a]

The town is guarded by strong Dwarf made walls and towers. [1b]