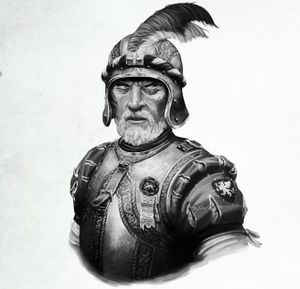 Ulrich Schutzmann is the commander of the Middenheims Watch in the Empire. [1a]

An openly devout Sigmarite, he is one of few to earned high office in City of the White Wolf. Known as a harsh, unbending disciplinarian he is also a sound strategist and tactician. [1a]

Tall and well-built, Ulrich cuts a imposing figure for a man of about 50 with closecropped iron-grey hair and dark-blue eyes. [1a]