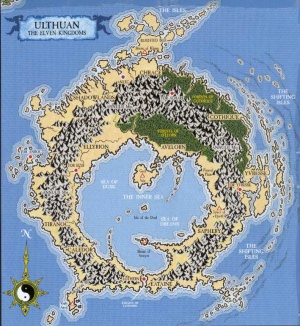 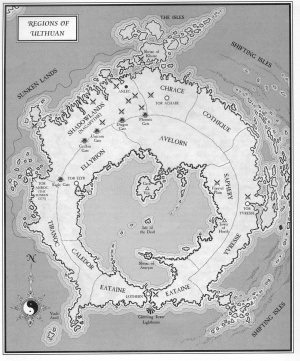 Ulthuan is an island-continent and ancient home of the High Elves. It is located in middle of the Great Ocean, west of the Old World and east of Naggaroth. The nation comprises ten kingdoms, each ruled by various noble families that owe allegiance to the Twin Thrones - the Phoenix King and the Everqueen. [4a]

Each kingdom has its own cultural identity, and is divided by the Annulii mountains into the Inner and Outer Kingdoms. [1a]

Noble beasts, as beasts go, though they are far from tame and placid. Their heads are like that of a huge bird of prey, whilst their bodies resemble that of a lion or any other great cat. All this is borne aloft by a pair of mighty wings that carry the Griffon across the high mountains and peaks where it dwells. A patiently hand-reared hatchling can be trained to bear a noble upon its back, making a formidable mount in times of battle and war. The hunters of Chrace are especially skilled in rearing and training them. [3a]

Created in the Time of Legends, the vortex draws in and disapates magical energy from across the world, ensuring that its chaotic power does not turn it into another Realm of Chaos. [4a]

These vast standing stones form a complex network that stretches all across the continent, capturing and channelling the magical energies that are drawn to it and sending it into the Great Vortex at the heart of the land. [4a]