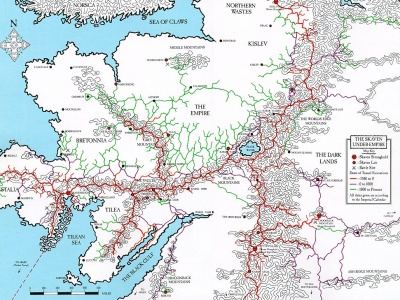 The Under-Empire is the network of Skaven tunnels and strongholds that stretches all across the Warhammer world.

Although the majority of Skaven Strongholds are situated in the Old World, the tunnels stretch under Araby, the Southlands, the Dark Lands, Lustria, Naggaroth and even distant Cathay. No continent except Ulthuan remains untouched.[1a] This is because the Skaven cannot penetrate the magical defences, and there are creatures that can detect even the stealthiest Clan Eshin assassin.[1h] However, it is only a matter of time before the Council of Thirteen find a way.

Only the Dwarfs have the faintest knowledge of how large the Under-Empire truly is.[1a] Many Dwarf Holds have already been lost to the Skaven, whilst the rest are constantly under siege from below. Even the lower levels of Karaz-a-Karak, the Dwarf capital, are sealed and guarded to prevent the Skaven rising up to destroy the city.[1g]

Likewise, the realms of men are riddled with Skaven tunnels.[1a] Most men remain completely unaware of this, but whether this is due to simple ignorance or the magic of the Grey Seers is unknown.[1e] Regardless, the Skaven have major lairs underneath Nuln, Marienburg and Middenheim in the Empire, Brionne and Quenelles in Bretonnia and Miragliano in Tilea. There are even spyposts beneath the Marauder camps in the Northern Wastes.[1a]