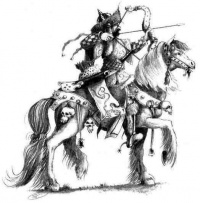 A mounted bowman from an Ungol tribe.[1]

The Ungols are a people who now predominantly live in the north of Kislev. [3a]

Ungols generally have swarthy skin which is tough and leathery on hands and faces, they have dark heavy-lidded eyes and their hair is almost always black, thick, coarse. As a people, they are hardy squat, thick boned and heavily muscled. Many are are accustomed to cruel weather. However many Ungols have mixed blood with the Gospodar, Norse, Kurgan and Ropsmenn leading to paler skin, red hair and blue or green eyes. [3a]

The Ungols are the people who inhabited the land now known as Kislev before the arrival of the Kislevites (known then as the Gospodars). They dominated a tribe known as the Ropsmenn but also lived alongside the Teutogens who bordered their territory. Later, they fought against the people of Norsii, forcing them north into what is now known as Norsca. The Norsii arrived as a result of being forced into Kislev by the armies of Sigmar Heldenhammer. Sigmar then aided the Ungols by fighting off the Orcs and Goblins in the Worlds Edge Mountains and, after fighting together at the Battle of Blackfire Pass, a peace was established between the two peoples.

The end of Ungol dominance in Kislev was marked by the arrival of the Gospodars over the High Pass, who overran their cities and habitations. They were forced further westward into Ropsmenn country and under the Ungol Warlord Hethis Chaq, the Ungols fought a host led by King Weiran up to the cliffs overlooking the Sea of Claws. Here the Ropsmenn people were broken and scattered forever. Norvard was the greatest city of the Ungols, until it was overrun and renamed Erengrad by the Gospodars. At this point in history the Ungols were effectively defeated and absorbed into the Gospodar population.

Although defeated, the Ungol culture continues on. Praag has a high Ungol population, some would say they have more power here than the Gospodars do. Some of the fastest Kislev cavalry archers are of Ungol blood, the Ungol Horse Archers. They are watched over closly by the Gospodars, but are used throughout the lands due to their speed of deployment and knowledge of the ground. Also, the Kossars, the foot troops of Kislev, were once a tribe of mercenary Ungol warriors. They are now a combined force of Ungol and Gospodars, an attempt to bind the two peoples together.[2]