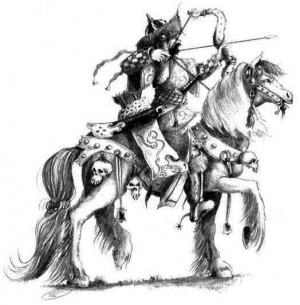 Ungol Horse Archers are mounted auxiliaries from the northern tribes of Kislev. [1a][2a]

They are some of the fastest cavalry in the Old World but lack the discipline of regular army units. They are trained to fight with bow and arrow from a young age and love to run rings around their opponents, attacking, withdrawing and then attacking again. They wear minimal armour but carry swords along with their bows and make up any martial lack with sheer numbers.[1a]

The Ungol Horse Archers originate from the tribes of Ungols of the north and were incorporated into the Kislev army after they being defeated and conquered by the Gospodar tribe of the east. They are mainly used as scouts and are mounted on warhorses.