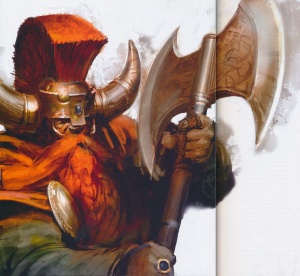 Ungrim Ironfist, the Slayer King of Karak Kadrin, is the last of the line of the Slayer Kings that have ruled the keep since his ancestor, king Baragor.[2a]

Ungrim bears the burden of the unfulfilled vow made by his ancestor, king Baragor, who took the name Ungrim, meaning "oath-bound" or "unfulfilled oath". By tradition, every king of the Ironfist line takes the Slayer oath. Ungrim is therefore bound by two conflicting obligations as both a Slayer and king - in addition to his duty to serve his city as king, he is also bound to seek out the most dangerous creatures he can find in order to achieve an honorable death in combat as a Slayer.[3a]

He broke Queek Headtaker's siege of Karak Eight Peaks, held off an Chaos army at the Battle of High Pass and has slain the dragon of Black Peak.[3a]

With the help of the ogre Golgfag, Ungrim defeated the orc Gnashrak Badtooth at the Battle of Broken Leg Gully, thus earning the gratitude of his people and the Dragon Cloak as a gift from High King Thorgrim Grudgebearer in recognition of his deed. [2a]

During the Storm of Chaos, Ungrim sent his son, Garagrim Ironfist, to the aid of Kislev. Garagrim had devised a plan to fulfill the Slayer vow and redeem his family line of its dishonour. He was killed when a Chaos Giant fell on him as it died, thus fulfilling the Slayer vow of his family line, however, unable to bear the loss of his only son, Ungrim took the slayer oath once again.[1]