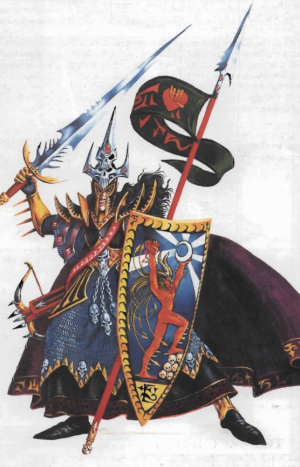 Urian Poisonblade was the personal champion of Malekith, the Witch King of Naggaroth, during the latter's invasion of Ulthuan.[1a]

Urian Poisonblade was one of the most infamous of all Dark Elven warriors, a mighty fighter of awesome ability, skill and cunning. [1a]

He had on many occassions the sorcerer surgeons of Naggaroth had changed his appearance as he lay chained to alters. His facial bones had been restructurd, his eyes replaced and his skin peeled from him and recieved that flayed from others in its place. As he underwent these transformations, his brain had been spelled to understand pain as pleasure and vice versa, although occassionally a mage might let the magic fail for their own amusement. [3b]

Dorians family was impoverished but of an ancient bloodline with his elder brother Dorian Silverblade becoming commander of the army of the north. [4b]

It was rumoured that he had been bred for battle by the Witch King himself to be the destroyer and relentless slayer of his enemies. Urian's cruelty was as legendary as his skill. His foes said that he had the heart of a daemon, and that if you were captured by him it was better to swallow your own tongue and choke to death than survive and face the horrors the following hours or days would bring. When Urian learnt of this he made sure that in future his prisoners had no tongue to choke on. [1a] He had his own palace in Naggaroth with hallucinogenic vintages and harem of slave girls. [3b]

Tasked by the Witch King himself with infiltrating Ulthuan, he had to abstain from his favoured drugs and wine undergoing several months of painful withdrawal. [3b] Urian Poisonblade infiltrated the high society of the High Elves, disguising himself as Prince Iltharis, a noble of House Silvermount from the Kingdom of Eataine, [3a] the role having been prepared by agents of the Witch King. [3b]

He took up residence in the Silvermount Palace and maintained a secret spell shielded chamber deep underground where he could communicate with Malekith. [3b] Urian managed to gain the trust of many noble families, such as the Captain of the White Lions Korhien Ironglaive and Tyrion. [3]

Shortly after their arrival at Lothern he met both Tyrion and Teclis, the former at his first fencing lesson with Korhein and Iltharis, disarming Tyrion in two precise moves. He later visited Teclis, gifting him with a original copy of the History of the Mages of Saphery. He later reported on them to Malekith, admitting that he liked them both, as he considerd honesty was safest when speaking to his master. [3a]

Despite himself, Urian grew fondly accustomed to the society of the High Elves, where one does not need to always look behind his back by potential rivals. Soon, he grew to be fond of his new life, although missing elements of his old one from compliant slaves to poison laced wine. [3b]

In 2173 IC he was summoned to the council of the Phoenix King to discuss the recent attack on the town of Tor Annan by N'Kari [3b] reporting this to Malekith later. [3c] Shortly after he attended Tryions first duel against Lord Larien with Korhien, betting on the young prince as well as advising him about the lords technique. [3d] He was pleased with Tyrion's victory, calling him a natural killer, as he was himself before they all went to celebrate. [3e]

At the next council meeting, as the attacks and victims were discussed and plotted, he realised who N'Kari was targeting - the descendants of Aenarion. He quickly informed Malekith, the oldest of that bloodline, who had discovered the same from his mother, Morathi Urian was ordered to communicate his findings in the hope the High Elves could deal with the Keeper of Secrets. [3f] He revealed his theory to the Council who decided to move those with the blood of Aenarion to the Shrine of Asuryan. [3g]

Some he even came to love, yet despite everything he knew it would have to end. In 2273 IC Urian was instructed by Malekith to kill the Everqueen herself, an act that saddened him but he carried out as ordered, poisoning her with dragonspike, whose potency depended on the magical nature of the imbiber. [4a]

With that act, he knew it was over and so the once proud and noble Prince Itharis became Urian Poisonblade once more.

Malekith contacted him to congratulate him and to tell him to wait for further tasks, the successful completion of which would see him become master of Lothern. [4c] When Tyrion returned from Lustria having found the legendary blade Sunfang, they met again to converse and spar, Iltharis being one of the very few who could match his skill. Urian was surprised at the guilt he still felt over his assassination of the Everqueen. [4d]

When Malekith invaded Ulthuan, he attempted to open a gate of Lothern with other Dark Elf sympathisers and was forced to knock out Korhien. He then attempted to kill Finubar himself, killing several White Lions but the Phoenix King escaped to a ship where he was defended by Lady Malene, guards and archers of her house. [5b]

Urian made his way to the captured city of Mancastra where his master had set up his headquarters. There he was recieved with great aclaim, Malkeith embracing him and stating:

As one of his first acts he was called upon to enact judgement on his own brother Dorian, who had failed to capture the Everqueen. Much to the suprise of Malekith and his court, rather than subject Dorian to long drawn out torture, Urian executed him with one swift blow. [5c]

It was at the battle of Finuval Plain that Urian met his nemesis. In the inital battles, Urian encountered Tyrion, killing his horse and overcoming him in a flury of blows, ending with one his blades at the throat of the High Elf. He suggested that he, Teclis and Alarielle kill themselves before they were taken alive by Malekith. [5d]

The Witch King's forces were poised, expectant of final victory over their hated High Elf enemies. Urian, as proud and arrogant as ever, strode forward and called out a challenge to single combat.

First the hero Arhalien of Yvresse and then Korhien Ironglaive, captain of the White Lions, accepted the challenge. Urian cut them down as if they were children. [5e] Then Tyrion stepped forth. The struggle between these two masters of the warriors' craft, so alike in skill and yet so deeply different in character, was awesome to behold. For fully an hour the two mighty heroes fought in grim silence, first one gaining an advantage, then the other, but neither able to land the final telling blow before their opponent evened the odds. Then Tyrion slipped, and fell heavily to the ground. Urian leaped forward, his blade held high, but before he could land his death blow, Tyrion struck. A quick thrust of his blade found Urian's heart and the fight was over, its end so sudden and abrupt that watchers could hardly believe it was finished. Urian slid slowly to the ground. "The simplest of tricks", he gasped to Tyrion as he fell. "You killed me with the simplest of tricks...“ And with that he died, receiving no answer from Tyrion other than a cold, pitiless stare. Prince Tyrion would win great renown for slaying Urian at this, the Battle of Finuval Plain.[1a][2][6]

In battle he was all but unstoppable. He had been taught by the greatest masters of the fighting arts in Naggaroth. He let his teachers know that he would slay them once he had learnt all he could from them, unless they could kill him first. This he did, slaying each of his teachers in turn as he outgrew them in skill and ability. The techniques he learnt made him the most deadly of fighters. It was said he knew more than 10,000 ways to kill an opponent, and 10,000 more ways to cripple them and leave them at his mercy. He could kill a bull with one blow of his bare hands, and deflect an arrow in flight with a sweep of his blade. He was death incarnate.[1a]

With such ability went pride and vanity. Urian was even heard to boast that he could slay famine himself in single combat. It may be that the Bloody Handed God heard this and decided to pay Urian back, in which case his hubris cost him dear, for it was Urian's fate to meet the only warrior who was greater than himself.

Malekith gifted Urian with armour crafted in imitation of that which the Witch King himself wore, amplifing his stregth and making him nearly invulnerable. He also presented him with a pair of black rune swords, feather-light and razor-edged, the very touch of them able to poison the unlucky victim. [5a]

In Bane of Malkith, It is the herald of Malekith [5e] who calls out the challange and Urian's last words to Tyrion are Well Done. [5f]