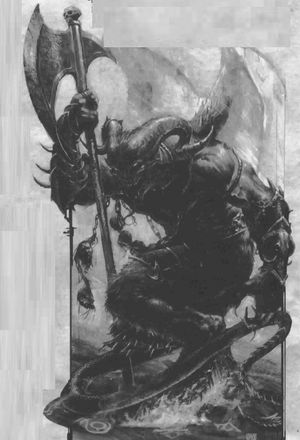 Urlfdaemonkin, formerly known as Urlf in his days of mortality, is a mighty Daemon Prince of Khorne and former chieftain of the bloodthirsty Snaegr, a tribe of southern Norsca. [1a]

The Snaegr are a tribe of merciless warriors dedicated solely to the worship of Khorne, and who rank high in his brutal favour.[1a]

Urlf was originally one of the chieftains of the Snaegr and his fury, strength and devotion to Khorne saw his elevation to daemonhood. With his apotheosis, his fellow tribesmen took to worshiping him as a daemon-deity of Chaos in his own right. The night he ascended having been adopted as his summoning day, where the Snaegr summon their ancient chieftain that he might impart the mighty blessings of Khorne upon their strongest warriors before they take to the south to offer up a bloody tithe to their god Khorne. This day is known as the 'Moon-Time of Urlf'. [1a]

Where once Urlf's mane and beard were golden and plaited, now they are burning flame. Where once his flesh was pale like the rest of his kin, now his skin has turned black as coal, and his teeth have been changed into iron tusks. Such a terrifying mien is fitting for a mighty daemonic god, particularly one who draws his existence from Khorne. Urlf's manifestation has been drawn from the dreams and legends his tribesmen have created for him since his ascension, for the Realm of Chaos is also the realm of dreams, and thus the material form of his immortal spirit is derived from the thoughts of his followers.[1a]

Urlfdaemonkin, as a Daemon Prince, possesses the power to bestow the blessings of his god Khorne upon those of his choosing. Transforming the subject into a mighty Exalted Daemon of Khorne, similar in appearance to Urlf's own behemoth stature. The boon also bestows highly enhanced strength, as is common to many of Khorne's unholy rewards. The current chieftain of the Snaegr is known as Grydal, Scourge of the South, who is one of Urlf's many descendants.[1a]