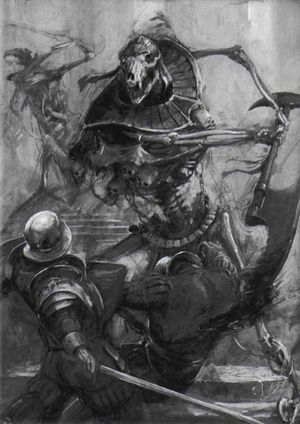 Ushabti are giant statues carved in the image of the many deities of the Nehekharan pantheon and guard the great pyramids of the Tomb Kings.[1a][2a]

The word Ushabti is a Nehekharan word that means Chosen of the Gods. [2a]

Ushabti are imposing monuments, over three times the height of an average human. Being larger, they are fiercely strong but also very agile. When they are needed, the Tomb Kings bring the Ushabti to life by channelling great magic through them.[1a]

Those that fight for the Tomb Kings see it as a great sign when Ushabti enter the battlefield, being representatives of their gods.[1a]

In the time before Nagash, Ushabti also known as the Devoted were human infantry, given differing blessings by the gods depending on which deity favoured their home city and the strength and power of which was in proportion to the faith of the individual Ushabti. They acted as the bodyguard for their king, in much the same way as the Tomb Guard does now, in death but in Mahrak they guarded the Hieratic Council and the temples. A single temple in the city was able to muster no more than two score and ten holy warriors. [3a]

Symbols of the Gods

The most favoured visage that the Ushabti are fashioned to resemble include Djaf, Phakth [2a] and Ptra. [1a]

Some wield vast staves whilst others use huge bows that shoot arrows the ize of spears with each weapon is beautifully crafted and engraved with hieroglyphs and patterns. [2a]