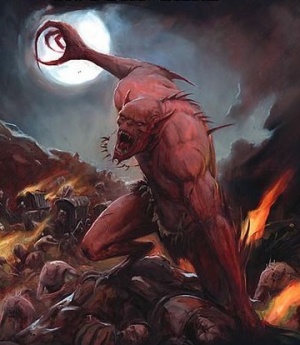 Ushoran was a Noble of Lahmia, [2a] one of its greatest warriors alongside Abhorash and a cunning diplomat, he became one of the first vampires and later ruler of the ill-fated Strygos empire. Becoming the first and greatest of the hulking Strigoi Ghoul Kings.

He was also a giant of a man and although not as skilled a warrior as Abhorash, his sheer strength and stamina eclipsed that of any in Nehekhara.

Lord Ushoran was a powerful nobleman in the court of Lamashizzar, born into one of the oldest families of the city and infamous for hs intrigues. He was chosen to be part of the cabal the king formed to study the books of Nagash and the captive Arkhan the Black. [2a]

Following the fall and subsequent death of Lamashizzar, he became Queen Neferata's spymaster and a cunning diplomat, known as the Lord of Masks. He was part of her inner circle (the Lahmian Court) having first received her version of the Elixir of Life, and when she became the first vampire he was one of the first she ushered into true immortality. [2b]

He cultivated his own Bloodline within the court, biting and turning nobles he favored more than others and building a small group of followers. As a vampire he developed his skills of obfuscation and misdirection as he learned his physical form was malleable. [2b] He continued to serve Neferata (and indulge in own sadistic appetites) but like many of the court grew disenfranchised with her rule, especially when she took in the young prince Alcadizaar.

In -1300 IC Ushoran managed through tomb raiders, to obtain the skull of Thutep to assist W'soran's attempts to contact the spirit of Nagash. Unknown to them however, Nagash was not actually dead so the ritual failed again and again. [3a] After Alcadizzar fled from Lahmia and Neferata in -1290 IC, he spent much of the next five years acting as the queens tortuerer, as she desperately sought the missing prince. [3b]

Frustration led him to, along with the sorcerous W'soran, to inadventently contact Nagash in his fortress of Nagashizzar. Neferata, Lord Ankhat and her progeny slaughtered the thralls of the former priest. Captured, W'soran taunted her that the Great Necromancer was coming and she would grovel at his feet. In response she staked him, ordering Ankhat to stuff him in a barrel and bury him beneath the temple where no-one would find him. Suspicious of his part in the rutual, Neferata ordered Ushoran to find Alcaduzzar or suffer a worse fate than W'soran. [3c]

Secretly he dispatched agents to locate the fortress of Nagash and by -1200 IC he discovered it, worryingly close to Lahmia. rather than suffer his wrath, he decided to offer an alliance - if he would depose of Neferata, then Ushoran would ensure Lahmia would aid in the attack on the rest of Nehekhara. He convinced Zurhas to act as his envoy to Nagashizzar, planning to dispose of him later. [3d]

In -1200 IC, Learning of Lahmia's unholy practices the priest kings of Nehekhara united and marched on the city. Ushoran prepared to flee, having prepared for when Neferata's patience ran out but he wa intercepted by Lord Ankhat, Neferata and her handmaidens - he was nearly killed but guessed correctly that it was Alcadizzar who had gathered the cities together, telling the queen and suggesting a plan to save them all. [3d]

The Nehekharan's raised Lahmia to the ground whilst Ushoran was severely burned in the battle and he and the few surviving vampires were all forced to flee.

Driven to madness by his wounds and a deprivation of blood Ushoran found sanctuary with the ghoul tribes hidden in the bowels of Nagashizaar. Eventually he was discovered by W'soran who had also fled to Nagashizaar to find protection in the service of the Great Necromancer. As he slowly regained his wits Ushoran became a useful tool of Nagash's but never a very appreciated one. Ushoran was present for Nagash's failed campaign against the united priest kings, his subsequent revenge plague, Nagash's second and successful invasion, and finally Nagash's assassination at the hands of the captive Alcadizaar. With his master's destruction once again Ushoran fled.

Sometime later a necromancer called Kadon of the Lodringen tribe had found Nagash's Crown of Sorcery in the hands of the corpse of Alcadizaar and created a new empire in the Badlands. When Ushoran came to it's capital city Mourkain in -1020 IC he spent many years watching and biding his time before eventually slaying Kadon and claiming the crown and the empire for himself. He styled himself as a wise warrior king and slowly inducted the barbarian civilization in the ways of his own people. Within decades the Strygos empire had became a new Nehekhara, albeit a pale a twisted shadow of the original. [1a]

Once again allying with his old friend and rival W'soran Ushoran bound the crown to himself, unaware that he was in fact being influenced and corrupted by the remnants of Nagash that resided inside it. With both Neferata and Abhorash as his (rather disloyal) vassals he expanded the empire further and further. Despite Neferata's rather inevitable betrayal Strygos grew and grew. Neferata however, still incensed for what she saw as Ushoran's culpability in the fall of Lahmia, manipulated the local greenskins into a gigantic WAAAGH! and directed them towards Mourkain. Ushoran fought fiercely in the defense of his new home but eventually Mourkain was destroyed and the rest of Strygos followed soon after. Ushoran was believed by most to have been destroyed, after tearing the head of a mighty Orc warboss.

Ushoran did indeed survive, driven to bestial madness by his loss and for centuries remained hidden. He did however stay oddly loyal to the decedents of his lost subjects. The Strigoi were forced to eat the bodies of the dead, mutating them into vile hulking beasts, resembling a massive vampiric ghoul. The now nomadic Strigany were often persecuted by the intolerant northern nations over the following centuries, culminating to the point that the genocide of their race made the Elector Count more eligible in the eyes of the Empire. Ushoran took vicious revenge on these persecutors, with the count himself turned and made into one of the monstrous ghoul kings that his vampiric bloodline had devolved into. Ushoran enjoyed watching the former tormentor struggle with his Vampirism, with the man only capable of restraining himself out of fear of becoming like the other Strigoi.

Many speculate that the so-called Ghoul King said to be haunted and hunting the ruins of Mourkain could indeed be Ushoran.