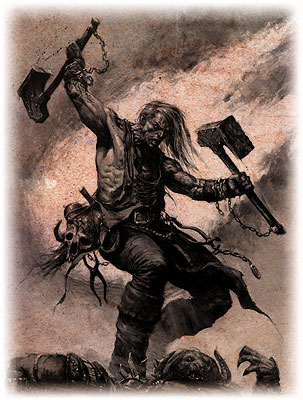 Valten, Exalted of Sigmar, also known as the Chosen of Sigmar, was a mighty champion of the Empire imbued with a portion of Sigmar's own power. He was instrumental in the End Times, and the eventual return of Sigmar Heldenhammer himself.

Valten was born in a Reikland village called Lachenbad where he had an uneventful childhood, growing up as the son of a blacksmith and learning his father's craft as most sons do. He was blessed with a strange mark on his chest, shaped like the twin-tailed comet of Sigmar, and was also blessed with strength and intelligence, although nothing that would set him apart from another man. [3a]

The comet is a powerful omen and his birth caused a great stir. Many believed that Valten would bring pain and suffering to the village and sought to have him cast out and left in the forests or drowned in a river. His parents declared he would be brought up and his father was big enough so that people respected him. [3a]

As he grew, he was seen to have an understanding of anything that fell before him: it was seen in his eyes. He was bigger and stronger than other boys of his age. He soon became a well liked child and those who sought his death began to like him and forgot their prejudices. On his 18th birthday however, hordes of Beastmen poured from the forests. They were led by a Beastlord known as Rargarth and his horde was ten times bigger than anything that had come in living memory. They plundered and burnt the village, those who could defend themselves tried but ultimatly failed. They gave no quarter and killed any they found. Valten on the other hand, refused to die. He smashed his way to his father's forge, using his bare fists to kill Beastmen in his way. He picked up two heavy hammers and set about the horde like a possessed man. All who came near him were killed, and the villagers seeing this followed the boy towards the hordes. [3a]

Valten then found Rargarth. A great battle ensued, where Valten was sliced across the chest by Rargarth's scimitar. Rargarth howled in joy and prepared for the killing blow. Valten raised his hammer in defiance just in time and the titanic clash forced Valten to one knee. Valten slowly began to rise, his every limb shaking with the effort until he was on his feet. He kicked out and sent the Beastlord stumbling backwards and hurled his hammer at the beasts head, shattering its skull. [3a]

With their leader dead, the Beastmen retreated in panic and the villagers chanted Valten's name. Though the village had been half razed, it had been saved from total destruction by a boy. Word of his victory spread quickly and a number of interested parties came to visit him, to learn of the boy who had become a hero. [3a]

One such visitor was Luthor Huss, self-proclaimed Prophet of Sigmar. He took Valten to see Karl Franz at the capitol, Altdorf. Karl Franz faced a mighty dilemma. It was likely that the people would want Valten to run The Empire, but this was not the time for political change, as Archaon was advancing on the Empire. Luthor pleaded that Emperor Karl Franz step aside to allow Sigmar's Chosen to take his rightful place on the throne. After long consideration, the Emperor refused to step down, but instead gifted Valten with Sigmar's hammer Ghal Maraz. The Emperor proclaimed Valten as the spiritual leader of the Empire and vowed to lead the Imperial armies by his side. Together, Valten and Karl Franz set out to help the besieged city of Middenheim.

After the armies Karl Franz had mustered reached their final staging point at Talabheim, Valten was gifted with a suit of gromril armour from the dwarfs. It has originally been forged for Sigmar over 2,000 years ago, but was never claimed. From Teclis, the High Loremaster of the High Elves, Valten received the mighty Elven steed Althandin, sired by Prince Tyrion's own mighty steed, Malhandir. Cheered on by the rank and file, the army headed for Middenheim. Karl Franz's army relieved the bloodied yet victorious Middenheim defenders, forcing Archaon and the remnants of his forces to withdraw, before fighting a series of battles to drive them from the mainland. In the final battle, Valten finally brought the Everchosen, Archaon, his fated nemesis, to single combat.

In revenge for the steed he had lost to Chaos artillery, Valten first destroyed Archaon's daemonic mount, hurling him to the ground. As Valten raised the Hammer of Sigmar for the killing stroke, Archaon unleashed the daemon bound within his weapon and with it impaled Valten. Valten's aim was spoiled, but not ruined: the blow opened Archaon's armour and dashed him to the ground.

As Valten tried to pull the daemon blade free, Archaon regained his feet and struck again, carving open Valten's breastplate and sending him to the ground. Seeing the mark of Sigmar on Valten's chest, Archaon slipped his guard and stood backwards, as in shock. Luthor Huss charged the Everchosen. Huss landed a series of mighty strikes, including a mighty blow to the side of the head that sent the Archaon down to a knee. Archaon swiftly counter-attacked, however, and hurled Huss across the battlefield. Panting, bleeding, Archaon's head met that of the Orc Warboss, Grimgor Ironhide. Splintering the Chaos lord's shield and sending him sprawling, Grimgor battered Archaon twice around the head before placing his axe on the tip of his throat. Rather than deliver the killing blow, Grimgor spared his opponent, letting him slump to the ground. The Orc proclaimed 'Grimgor iz da best!' and quit the field, cheered by his followers.

Valten lay comatose within the temple of Shallya, after being carried there by Luthor Huss. Despite his own wounds, Huss kept a bedside vigil over Valten. Across the city, arguments for and against Valten's divinity and right to be Emperor re-emerged. Graf Boris Todbringer and Grand Theogonist Esmer asked for three days to resolve the situation. The next day Luthor Huss visited Karl Franz, his eyes filled with tears. Valten had been murdered. Shocked, Karl visited the room where Valten had been recuperating. The bed and the sheets were covered in blood; Valten's body had been taken. A green, glowing knife had been stabbed into his mattress, and the sign of the Horned Rat (a rune used by the Skaven) had been carved on the wall. Huss asked the Emperor what he should do. Karl Franz took the Hammer of Sigmar from Huss, and then gave the priest a new duty. He would proclaim to the people that Sigmar had left the land of man once more, that He had left his hammer to the Emperor as a sign of his trust, that Huss was still His prophet, and would look for his return when The Empire needed him most once again. .[1d]

Valten was instrumental in the defense of The Empire during the End Times. He slew many of the Chaos Warriors greatest champions, such as Vardek Crom and Wulfrik the Wanderer.

Valten was ultimately killed by a cowardly skaven Verminlord whilst challenging Archaon to single combat - much to the latter's fury -, his sacrifice was instrumental for Sigmar's return to the Old World, allowing the divine essence within him to return to its host.

Valten was one of the mightiest warriors alive in the Old World. Imbued with part of Sigmar's divine essence, it granted him strength beyond any normal man and allowed him to shrug of the most grievous of wounds, healing almost instantly.[2][3a]