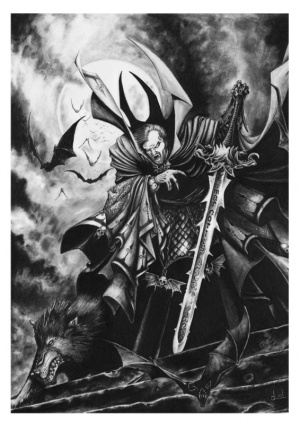 However, Neferata, the queen of Lahmia, in her thirst for immortality and eternal life, stole some of Nagash's books instead of destroying them as the kings had agreed, and took them back to Lahmia. Once safe within the walls of her own city, the queen began trying to replicate the Elixir of Life which had given Nagash eternal life. She succeeded to a certain degree, her heart stopped beating and she stopped breathing, yet she did not die; she had become the first vampire. [7a]

Realising that she would need powerful lieutenants she shared the elixir with twelve individuals including Abhorash, Naaima, Ushoran and W'soran.[1][7a]

These ancient beings discovered that they could produce new vampires through a process known as the "Blood Kiss", and before long, the entire court of Lahmia had become blood-drinking creatures of the night. However, their new-found powers also served to make the vampires arrogant. When the vampires discovered that Nagash still existed, they sent envoys to meet him at Cripple Peak. Some of these messengers, however, were captured by neighbouring kingdoms. Realising that the threat of Nagash was not yet ended, the priest-kings once again banded together, and marched against Lahmia. [7a]

During the ensuing war with the other kingdoms Lahmia was sacked, and most of the vampires were slain. Fleeing Lahmia, the vampires made their way north, where they regrouped upon meeting up with Nagash and were made generals of his armies. Nagash intended to turn the entire world into a kingdom of death, were no action would be taken except when he willed it. However, Nagash was unprepared for the might which his former homeland could muster. Ruled by Alcadizaar, the armies of a unified Nehekara rode out to meet Nagash's undead horde. When Alcadizaar defeated them all of the vampires, except the line of W'soran fled. For their cowardice, Nagash cursed the Vampires to be burnt by the rays of the sun. [7a]

After this event the vampires fled and spread across the known world founding their own castes, based on their ideals and abilities. [7a]

Ghoul Kings - Are hulking Monsters, warped by feeding on rotting corpses. In appearance they are even more monstrous than the Necrarchs and are huge and heavily built. The first Ghoul King was Ushoran who with his followers fled north to what is now the Badlands and built a great empire; when it was destroyed by Orcs the Strigoi were scattered and eventually degenerated into the first Ghoul Kings, with many more outcast vampires joining them since. Ghoul Kings are animalistic, half-mad and can be barely intelligent. They have similar combat ability's to the Blood Dragons, but in terms of sheer strength and bestial fury rather than skill-at-arms.

Vampires across the World

The Blood Dragons retain a presence in the western desert but the wider familiarity with necromancy means less ignorance about vampires and other undead. [3a]

Many peasents in Bretonnia fear vampires as it was home to the Red Duke and others of his kind, but the Lahmians find inflitrating high society easy. [3a]

They have not forgotten that Nourgul razed the lands between the Southern Sea and the Irrana Mountains. They trust to Myrmidia to aid them still in protecting their nation from vampires. [3a]

Many believe that regular consumption of Chesnochnaya - garlic vodka keeps the bestial vampires found here at bay. The frozen corpse of the vampire Tsarina Kattarin remains on display to warn others of her kind. [3a]

Although the states seem mostly vampire free save for Strigoi nests in the country, it is easy for them to remain hidden and work in the shadows with Miragliano rumoured to be a haven for vampires. [3a]

Weaknesses and Killing a Vampire

It is not known fully how sunlight effects Vampires, but it is believed that it will only kill the weakest of their kind. It is also known that Vampires are nigh on impossible to kill, they can ignore wounds that would slay a mortal and continue fighting. When they are eventually killed they, can burst into flames, crumble into dust, or leave a human corpse. [1]