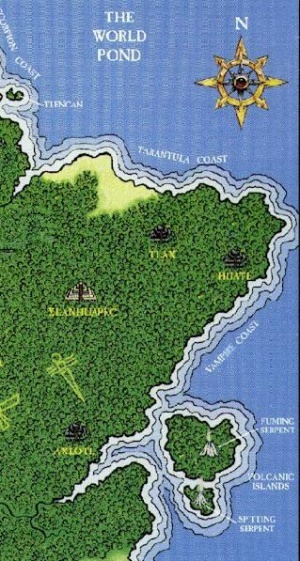 The Vampire Coast is the realm of the mad Vampire Luthor Harkon on the coast of Lustria.[1a]

The Vampire Coast is bordered to the east by the Great Ocean (also known as the World Pond) - and to the west by the steaming jungle. To the north a peninsula, filled with jungle, lies between the Vampire Coast and the Tarantula Coast. There are the ruined Lizardman City of Huatl near the coast and Tlax deeper inside the jungle. At the southern end of the Vampire Coast there lies the Volcanic Islands east to the delta of the River Lambada. North to that delta the ruins of the City of Axlotl are found, which was looted and destroyed by Luthor Harkon's undead hordes.

In 876 IC a Norse longship boarded a Imperial trade ship. The Norse stole a precious antique coffin, not knowing that the Vampire Luthor Harkon resided inside. As the Norse vessel was washed to the shores of Lustria, they were all drowned or starved to death. Although the crew were not already dead but undead, and accompanied the Vampire when he made landfall and started to conquer his new Undead empire. With his Zombie hordes he started to conquer his part of the jungle and loot the pyramid cities of the Lizardmen. After he was defeated in 930 IC in the Battle of the Eclipse by the Kroxigor Nakai near to the temple city of Oxyl, he started to create vast hordes of Zombie Pirates to execute revenge on the Lizardmen. [1a]

In 1011 IC he allied with the Sirens and wrecked countless ships at the rocky shores. Any drowned sailor became a new undead servant to him. Then in 1127 IC he began to raise sunken ships and terrorized the seas of the Warhammer world with his ghost ships with undead crews and his hordes grew even more. Then in 1351 IC he marched with his amassed hordes south, slaughtered the Skinks that spotted his undead army, and looted and destroyed the Lizardmen City of Axlotl. Although the Lizardmen were able to save some of the most potent artefacts he still took many magic items back into his shady realm. [1a]

In 1492, many nations and races sent expeditions to Lustria after Marco Colombo‎‎ returned to the Old World in a ship laden down with gold. Luthor dispatched emmisaries to many of these, offering his aid against the Lizardmen in the form of gilded Ebony Skulls which allow the user to call forth undead seamen. [1c]

Lord Xltoc of Itza has dispatched many armies against the coast, eager to destroy the undead and recover the scared items stolen from them. [2a]