From Warhammer - The Old World - Lexicanum
(Redirected from Vampireslayer)
Jump to: navigation, search 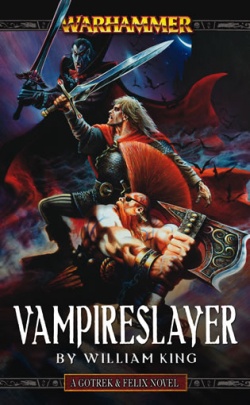 Vampireslayer is the sixth novel in the Gotrek & Felix (novel series) by William King.

Dwarf slayer Gotrek Gurnisson and his sworn human companion Felix Jaeger are beset by a new and terrible foe in their unceasing war against Chaos. When a powerful evil forms in darkest Sylvania, it threatens to reach out and tear the very heart out of the Empire. But when this foe is a powerful, centuries old vampire, the deadly battle can only result in death and tragedy.

Walking through the ruins of Praag following the great siege of the previous book, Felix Jaeger comes across a woman weeping over a murdered streetwalker and learns of a mysterious killer stalking the city. The killer, a vampire named Adolphus Krieger, is in the city to recover an ancient artifact called the Eye of Khemri. The Eye's owner, Kislevite nobleman Count Andriev who is distantly related to Ulrika, hires Gotrek, Felix, Snorri, Ulrika and Max to investigate the disappearance of his guards. Max magically examines the Eye of Khemri and falls into a coma after triggering a trap left by the Eye's creator, Nagash. Learning of the group's involvement through his servant Osrik, Krieger has his underlings launch a diversionary attack on Andriev's manor while he steals in to take the Eye. Gotrek, Felix and Snorri kill their way through Krieger's underlings but are delayed long enough that Krieger is able to break into the vault, kill Andriev, seize the Eye and take Ulrika hostage. Felix and the Slayers are forced to let him go and Krieger abducts Ulrika, taking her with him as he sneaks out of the city and heads for Sylvania.

Gotrek, Felix and Snorri search in vain for Ulrika over the next few days until Max awakens from his coma and reveals he placed a tracking spell on the Eye of Khemri. Ulrika's father Ivan Straghov joins them with a detachment of Kislevite horse-warriors and they depart Praag in pursuit of Krieger. During the journey Krieger and his followers are attacked by goblin wolf riders but Krieger turns the wolves against their riders, adding the pack to his coven of followers. He also begins drinking Ulrika's blood, slowly bringing her under his dominion. Gotrek and Felix's group track down a band of beastmen and catch up to them as they are attacking the caravan of Sylvanian noblewoman Countess Gabriella von Nachthafen, whom they save from the attack and join up with.

Entering Sylvania, Gotrek, Felix and co. are brought to a gathering of Sylvanian nobles at Waldenschlosse and learn of the vampire threat rising in the land and the history of the Vampire Counts. They encounter a Ghoul in the town of Waldenhof and Countess Gabriella and her men join their pursuit of Krieger, whom they have learned is a vampire and necromancer who plans to use the Eye to gain dominion over other vampires and raise an army of Undead. Krieger and his followers reach Drakenhof, which Krieger sets about rebuilding. He raises a small army from a nearby graveyard and turns Ulrika into a vampire.

While staying overnight at an inn, Gabriella reveals to Felix that she herself is a vampire and the one who turned Krieger. Though reluctant to trust her, Felix agrees to work with her and confides in Max and later Gotrek. The group reach Drakenhof, where Gotrek, Felix and Snorri pursue Krieger but fall into an ambush of ghouls while Max, Ivan, Gabriella and their men are attacked by Krieger's undead forces. Max destroys half of Krieger's minions with a powerful spell and Gotrek, Snorri and Felix survive the ambush but most of the Kislevites are killed. Felix, Gotrek and Snorri locate Ulrika but are horrified to discover she is a vampire and she manages to escape them. All forces converge on Drakenhof's throne room, where Krieger draws on the castle's dark magic to animate suits of armour and summon giant bats to attack the heroes. Gabriella and Ulrika and brought under his sway by the Eye of Khemri and Ivan is killed by a bat, but Krieger's distraction allows the women to throw off his influence and he is killed when Snorri brings a spiked chandelier down on top of him, Gotrek finishing him off with an axe blow that destroys the Eye of Khemri. Krieger's minions collapse or flee with the Eye's destruction and Gabriella takes Ulrika under her wing, leaving Felix, Max and the Slayers to mourn their loss.