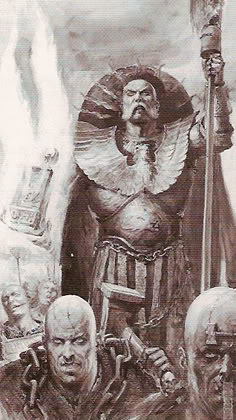 Volkmar von Hindenstern, known more famously as Volkmar the Grim was the Grand Theogonist of the Church of Sigmar and one of the most powerful religious leaders in The Empire, leading for longer than an average man's lifetime.

A fearsome Warrior Priest, Volkmar displayed a might well beyond that of normal men.

He is a pious and foreboding man who is utterly dedicated to his faith and the destruction of Chaos in all its form. When the Grand Theogonist accompanies an army into battle, he typically rides atop the resplendent War Altar of Sigmar, inspiring the surrounding soldiers to great acts of heroism as he strikes at the followers of Chaos down with powerful blows and words of divine power.[4]

Volkmar is a holy terror to all evil within the battlefield, a man who fights with the fury of Sigmar himself. It is said that Volkmar's soul was forged of steel and he fights the malign influence of Chaos with every fiber of his entire being. Though possessed of a warrior's soul, Volkmar is a wise man who knows that Chaos cannot be defeated with strength of arms alone. The Grand Theogonist is convinced that the answer to truly ending the threat that lies in the North lies buried within the archives of the Empire's vaults of ancient scrolls and holy scriptures.[4]

For days at a time, the Grand Theogonist has locked himself in the secret repositories filled with the tomes of forbidden lore, in search of an answer to ending the dark menace of Chaos. Such a task is epic in the extreme and, so far, the Grand Theogonist has gathered together only a few fragments and scraps of pertinent knowledge. However, what Volkmar has learnt speaks of a great prophecy, a final battle between good and evil that will either see the threat of Chaos crushed forever, or the Empire, and that of the entire world, shall be destroyed in a tide of flame and bloodshed.[4]

Volkmar was killed early in the End Times when he was captured by Mannfred von Carstein. He was sacrificed in order to reincarnate Nagash. His successor was Arch-Lector Kaslain.[5]