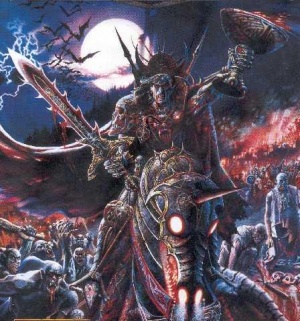 Grand Master of the order of the Blood Dragons

Walach Harkon is a Vampire Lord, and founder of the Order of the Blood Dragon Blood Knights.

Walak of the tribe Harkoni, was born in ancient times and was turned into a vampire by Abhorash, champion of Lahmia in Nehekhara. While serving in Lahmia he was master of the palace guard and one of Abhorash's four primary assistants (along with his cousin Lutur of the harbour guard). After the fall of Lahmia he traveled with his Sire to Mourkain to serve under king Ushoran. It is unknown how he survived the fall of Mourkain and the Strygos empire.

Many years later he came to the Blood Keep. The fortress guarded the mountain pass to Bretonnia, and the Blood Dragon Order of Knights stationed there were pledged to the protection of the people of the surrounding area. In a single night he challenged and slew all the inhabitants, turning those he considered worthy opponents into vampires and the reanimating the rest as Wights. Thereafter the once noble Order of the Blood Dragon became monstrous Blood Knights with Harkon as their Grand Master. The living people of the area, long protected by the knights, now became the prey of the fallen order. [1b]

During this time he slew Counts of the Empire, Elf and Dwarf Lords but when the truth was uncovered, the keep was put under a lengthy siege by an Imperial army. At the end of the siege the order was destroyed as an organisation, although a number of the knights, including Harkon survived, his consort Aurora did not. She was beheaded by the Reiksmarshall and his favourite son-in-blood, Mikael was killed by Warrior Priests of Sigmar. [1a]

Later he gathered a new brotherhood of 16 knights and returned to the keep where once again they sat in the great feasting hall with their unearthly-beautiful brides, the walls guarded by Wights. [1a] He commands again as Grandmaster of the Ordo Draconis. [1b]

During the End Times, the newly resurrected Nagash started recruiting many of the world's most powerful undead lords to form his generals. Harkon joined and became one of the Mortarchs. To this end he plays a vital role in the defense of the Auric Bastion in the northern Empire. Under the command of Vlad von Carstein Harkon fought at the Battle of Alderfen. Here a Nurgle force breached the bastion and started butchering the Imperial forces beyond it. All looked lost until the surprise undead counter charge, led by Harkon and his knights, halted the Chaos advance long enough for the breach to be sealed. However, in his zeal Harkon and his knights had penetrated far beyond the Bastion itself and then found themselves trapped behind it.

It wasn't until the Battle of Heffengen that Harkon would resurface. After the collapse of the Bastion, Von Carstein sought an alliance with the Empire and to this end planned to fight alongside the Imperial forces at Heffengen to hold back the Chaos hordes led by Crom the Conqueror. Just as he was about to reveal himself and be recognized by the Emperor as a hero and ally Harkon and he knights charged onto the battlefield from the Chaos lines. It was revealed that while trapped behind the Bastion, Harkon had fallen to temptation and pledged himself to Khorne the Blood God of slaughter. This treachery reached it's peak when Harkon, rising a skeletal dragon, engaged in an aerial duel with Karl Franz, defeating him and casting him low.

There has to date never been a model for Walach Harkon