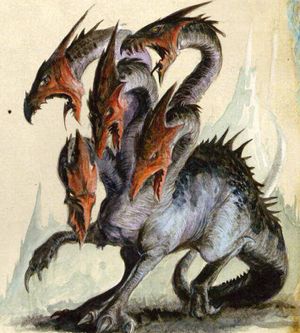 War Hydras are beasts selectively bred by the Dark Elves, naturally found in the Blackspine Mountains and the Iron Mountains. [3a] [4a]

They are absolutely huge, possessing many long necks and covered in thick scales. They can easily tear warriors apart with fangs or even crush them with the lethal coil of their many necks. Not only that, but they're near impervious to harm, with scales thick enough to deflect the blow. Even if it does get through, many enemies have witnessed the tough flesh re-growing within a minute.[1] Their scales are said to be harder than Dragon scales and hence sought out to make armour from. [2a]

The Beastmasters of Karond Kar continually experiment with cross breeding and magic to create more powerful and ferocious creatures. [3a]

They are found in the Darklands as well as the Worlds Edge Mountains but large numbers also live in the Blackspine Mountains and Iron Mountains of Naggaroth. [6a]

It is thought they are the result of the warping effects of the Winds of Magic, but they were found in the Annulii Mountains of Ulthuan and became part of the armies of the Naggarothi. [4a]

Only creatures as twisted as the Dark Elves would look upon the Hydra's vicious glory and deem it insufficient for the task at hand. But ever since the Witch King's Beastmasters first tamed the creatures, the Naggarothi have continually experimented with breeding techniques and dark enchantments to raise the raw ferocity and power of successive generations. The War Hydras of Naggaroth's armies are therefore a far more daunting foe than those the Dark Elves first encountered many long centuries ago in the Annulii Mountains.

War Hydras are notoriously difficult for their handlers to control, and a Beastmaster must be quick with his lash lest he be devoured in the enemy's stead. They are even more difficult to slay, for not only are their scaly bodies incredibly well-armoured, they also regenerate damage at a frightening rate. A foe's only chance is to sever all the monster's heads in quick succession -- if even a single one remains, the remainder will swiftly grow back and devour the impudent attacker for his troubles. The aggressive Hydra doesn't distinguish between friends and enemies. To prevent it from turning on Druchii troops, it is always accompanied by a pair of Beasmasters, their whips keeping Hydra on right track.[1]

There are many ways to be slain by a Hydra: torn apart, swallowed whole, crushed underfoot, immolated or even skewered by arrows as they ricochet off its scaled hide. Generals often see even their finest troops pulverized by just a single War Hydra and are then left to watch with horror as the beast emerges unscathed from the carnage, vents for an ear-splitting roar, and then charges forward with thundering strides to trample another regiment into ruin. Even worse, some are capable of breathing streams of fire from their many mouths.[5a]

Curiously, Hydras are almost exclusively used by Dark Elves, with little or no use by other races. This may be as a result of the Hydra being fairly common to Naggaroth, and fairly rare everywhere else, or the Dark Elves' laid back attitude to the substantial risks involved in using such creatures, but the true reason remains to be seen.[5a]

Unsurprisingly, not many enemies are able to brave such a monster, with many seeking solace in running. To counter that, the Hydras are able to move with surprising speed, easily outrunning foot soldiers. Even if the enemy manages to get out of the immediate range of its teeth, they are by no means safe. Each head is able to belch great gouts of flame, incinerating great swathes of infantry whilst [1][2a][3b] Their scales give them the equivalent of heavy armour. [2a]

They are driven into battle by a pair of Beastmaster Apprentices who control and direct it with long lashes and goads, but also are skilled enough to use the creatures bulk to shield themselves from enemies. [3a] They are each armed with a pair of Hand Weapons. [3b]