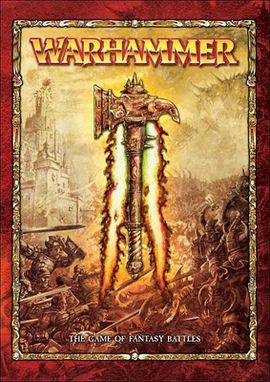 Warhammer, subtitled "the game of fantasy battles", started as a system to play battles with role playing game fantasy miniatures and subsequently evolved into perhaps the most widely known and most successful tabletop battle game in the world. Warhammer was first published in 1982 as a boxed set subtitled The Mass Combat Fantasy Role-Playing Game.

Warhammer: The Game of Fantasy Battles (formerly Warhammer Fantasy Battle and often abbreviated to Warhammer, WFB, and WHFB) is a tabletop wargame created by Games Workshop, and is the origin of the Warhammer Fantasy setting. The game is designed for regiments of miniatures of various fantasy races such as humans (The Empire, Bretonnia, Kislev), Elves (Dark Elves, High Elves, Wood Elves), Dwarfs, Undead, and Orcs and Goblins, as well as some more unusual types such as Lizardmen, Skaven and the daemonic forces of Chaos, with each race having its own unique strengths and weaknesses.

Warhammer has been periodically updated and re-released since first appearing in 1982, with changes to the gaming system and army lists. The eighth edition, released on 10 July 2010, was the final version. A series of releases during 2014 and 2015 focussed on the cataclysmic destruction of the game's fictitious world called the "End Times." In 2015, Games Workshop replaced it with Age of Sigmar.

First edition (1983) The first edition, written by Bryan Ansell, Richard Halliwell and Rick Priestley was published in 1983 and consists of a boxed set of 3 black and white books illustrated by Tony Ackland: Vol 1: Tabletop Battles, which contains the core rules, turn sequence, creature lists, potion recipes and features an introductory battle 'The Ziggurat of Doom'. Vol 2: Magic which explains rules for wizards of 4 different levels and the higher order arch magi. Higher level wizards have access to more powerful spells. In this system, a wizard picks his spells at the start of the game, must have the correct equipment (usually Amulets), and as he casts each one it depletes a store of 'constitution' points, until at zero points he could cast no more. Vol 3: Characters introduces 'personal characteristics' statistics, rules for roleplaying (including character advancement through experience points and statistic gains, random encounters, equipment costs, and alignment) and has a sample campaign "The Redwake River Valley".

Very little world background is given at all and the race descriptions are kept to a minimum, and most of the background given is in describing the origins of magic items. Some notable differences to later editions are the inclusion of Night Elves (later Dark Elves), the appearance of Red Goblins - and that Citadel Miniatures order codes are given.

Expansion The first edition was extended with Forces of Fantasy boxed set in 1984.

Second edition (1984) In 1984 the second edition was released, incorporating some of the Forces of Fantasy material, White Dwarf articles and Citadel Compendium material. This was again a boxed-set of three black and white books (with colour covers). Combat explains the core rules and turn sequence; while Battle Magic largely retains the same system as the 1st Edition, as well as adding specialities of Illusionists, Demonologists, Elementalists, and removing the requirements for Amulets. The centre pages are an introductory scenario "The Magnificent Sven" for which cardstock figures were also supplied in the box. The Battle Bestiary book features descriptions of the races, monsters and includes several example army lists and a points system for players to develop their own open-ended armies.

Also in the Battle Bestiary is the first appearance of the Warhammer 'Known World' along with a map, and a timeline which includes the Slann, Incursions of Chaos, inter-elf wars and The Empire. Minor rules modifications included rationalising all statistics to use numbers, and increasing all creatures' Strength by 1.

Campaign packs produced were Terror of the Lichemaster, Bloodbath at Orcs' Drift (1985, referring to Rorke's Drift) and Tragedy of McDeath (1986, referring to Macbeth). The pack Blood on the Streets was card buildings for terrain.

In 1987 the 2nd edition rules were expanded with the Ravening Hordes army lists which provided a more 'realistic' method of forming armies along stricter racial lines.

Third edition (1987) The Third Edition of the game was published as a single hardback book in 1987. It had the most in-depth and complex movement and manoeuvre system of any edition. Other changes included a variety of new specialist troop types, rules for war machines and a more finely tuned system of representing heroes and wizards. It kept the same magic system and open-ended army design system as the first two editions. However, by this stage the use of army lists was very much encouraged. Army lists for this edition were published in a separate book called Warhammer Armies in 1988; until then, use of the 2nd Edition's Ravening Hordes list was encouraged. This is partly because it was the last edition published before Games Workshop took a different commercial approach, leading to competition from former GW employees in the briefly published competing Fantasy Warlord.

The third edition was expanded with the Realm of Chaos: tome one, Slaves To Darkness, followed by tome two, The Lost And The Damned; and Warhammer Siege books.

4th edition (1992) The fourth and fifth editions of the game, released in October 1992 and October 1996, respectively, were similar to each other but quite different from the third. Fifth edition in particular became known pejoratively as "Herohammer" because of the imbalance between the very powerful heroes, monsters and wizards in the game and blocks of troops which existed effectively as cannon fodder. Both editions of the game were sold as box sets containing not only the rulebooks and a variety of other play aids but also sufficient plastic miniatures to be able to play the game "out of the box". The rules underwent a re-write compared to 3rd Edition. A completely re-worked magic system was produced which was available as a boxed expansion set. Rather than selecting spells they were drawn at random and the magic phase was based on the play of these cards, making magic a bit like a game within a game. The magic system was further expanded by the Arcane Magic box set and the magic element of the Chaos box set.

The fourth edition was also the first edition to enforce the use of army lists in the form of separate Warhammer Army books for the separate racial groupings. These books prescribed for each army a limited number of unit choices; specifying limits on the amount of points that could be spent on "characters", troops and monsters and so on. The books also included background on the particular army, illustrations and photographs showing models and have remained with the game though updated with the rules. The fifth edition won the Origins Award for Best Fantasy or Science Fiction Miniatures Rules of 1996.

The magic system was reworked and re-released in December 1996 as a single box covering the magic for all the armies. The magic was "toned down" (WD204) with spell casting limited to the players' own turn. The multiple card packs of the Colours of Magic system was replaced by 20 Battle Magic spell cards but the Colour Magic spells were in the rule book for players to use if they wanted.

Several boxed campaign packs were produced, Tears of Isha for example, gave a campaign for High Elves and included a card "building" to assemble. Likewise, the Orc and Goblin themed campaign Idol of Gork included card idols of the Orc deities Gork and Mork. The others were Circle of Blood (Vampire Counts vs Bretonnians), Grudge of Drong (Dwarves vs High Elves) and Perilous Quest (Bretonnians vs Wood Elves).

5th edition (1996) The fifth edition, released in 1996, re-introduced the Bretonnian forces, which had been left out of the 4th edition, and re-worked the Slann heavily to create the Lizardmen armies.

6th edition (2000) The sixth edition, released in 2000, was also published as a box with soft-cover rulebook and miniatures (Orcs and Empire). The Rulebook was also available for separate sale, hard-cover in the first printing and soft-cover after that. After the fifth edition, this edition put the emphasis back on troop movement and combat: heroes and wizards were still important but became incapable of winning games in their own right. There was also an all-new magic system based on dice rolling.

7th edition (2006) The seventh edition rules were released on 9 September 2006. It was available in two forms: as a single hardback rulebook for established gamers and as a complete boxed set game complete with plastic miniatures (Dwarfs and Goblins), The Battle for Skull Pass supplement book and a soft-cover rulebook that has less artwork and background material than the hardback version. The smaller rulebook from the boxed set was approximately half the size of the large book both in size of the cover and page count. The "Basic Rules" and "Advanced Rules" sections of both books were identical in text, layout, illustrations, credits, page numbering and ISBN. The two books had different front pieces and the larger rulebook has two extensive addition sections "The Warhammer World" (68 pages) and "The Warhammer Hobby" (56 pages) plus slightly expanded appendices.

8th edition (2010) According to the official Games Workshop webpage, the 8th edition of Warhammer was made available for pre-order on 14 June 2010 and was released 10 July 2010.

The new starter set named Island of Blood contains facing armies of High Elves and Skaven. A condensed mini-rulebook, as well as 10 standard dice, one scatter and one artillery die, two 18 inch rulers, and three blast templates are included in the box.

The first army to be introduced to 8th edition was Orcs and Goblins. They are one of the most popular Warhammer Fantasy armies, but their release in 8th edition was not totally expected, as at the time there were three (Dwarfs, Wood Elves, and Bretonnia) Warhammer army books which had not been updated since 6th edition. The Dwarf and Wood Elf army books have since been replaced with newer versions.

8th edition's Expansion (2011) The 8th edition was extended with Storm of Magic 'supplement' in 2011 (an expansion that features rules for using more destructive magic and monsters). Another one was released, called Blood in the Badlands shortly afterwards (it included some special scenarios and introduced rules for siege warfare). In 2013 Triumph and Treachery (an expansion that allows multi-player games of between 3 and 5 players) and Sigmar's Blood (a 5 scenario short campaign between Empire and Vampire Counts following the crusade led by Volkmar to destroy Mannfred von Carstein) were released. Another series of five books in 2014-15, entitled The End Times, saw the appearance of every major character of the setting. The last book Archaon described the end of the Warhammer world.