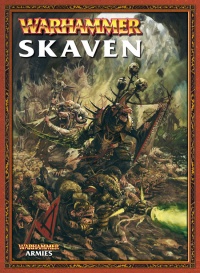 For all the books with this name see: Warhammer Armies: Skaven

Warhammer Armies: Skaven is an Army Book for the Skaven army in games of Warhammer Fantasy Battles. It was first published in 2009 and is for the 7th edition of Warhammer.

This section gives an overview of the Skaven race, including the four Greater Clans, the Under-Empire and the history of the Skaven. It also includes a time line from the origins of the Skaven to the capture of the Dwarfen mine Grim-Duraz in 2521 IC

16 pages of Skaven miniatures painted by the 'Eavy Metal team.

The complete army list for creating a Skaven Warhammer Army.

During the production of this book, the follow people were involved considerably.