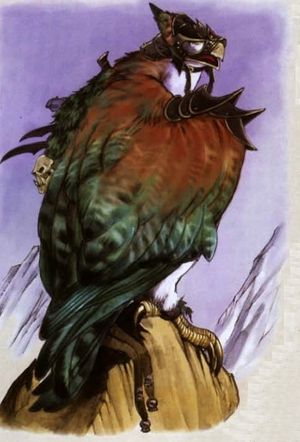 Warhawks are large intelligent birds of prey mainly found in Athel Loren. [1a]

To the Wood Elves they are known as the Keen Ones, the Shy-gwythiar or the Wind Riders. [1a]

They are not as ancient or powerful as the Great Eagles but they are far cleverer than a normal bird. [1a]

Most inhabit the forest of Athel Loren but some have been sighted in other locations and eyries have been noted in the Worlds Edge Mountains. [1a]

Long ago they fought against the Wood Elves and many on both sides were killed, eggs were killed and chicks slaughtered.[1a]

The Beast Caller Kirada made peace between the two races, with those who had killed the birds young offering themselves up for sacrfice. However the Warhawks replied that they would rather take their children and raise them as their own - becoming the first Warhawk Riders. [1a]