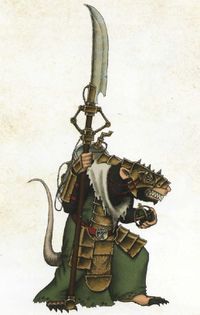 Warlock Engineers are the Skaven sorcerer-engineers of Clan Skryre. To the Warlock Engineers, sorcery is merely another field of technology, and their experiments and inventions blend the arcane with the scientific. Their endeavors have created the strangest and most baneful weapons and devices in the world, which are sold to the other Skaven clans. These devices include Doomwheels, Warpfire Throwers, Ratling Guns, Warplock Jezzails, and Warp-lightning Cannons.

Most of the Warlock Engineers' inventions incorporate the solidified Chaos known as warpstone in some way, which tends to make Clan Skryre weapons unstable and prone to disastrous malfunctions. Sometimes they base their inventions on the captured technology of other races, innovating upon their designs to create new and bizarre versions.

Warlock Engineers are also capable of using sorcery in the traditional way, and make use of a special device that enables them to see the winds of magic and tap into them to give them sufficient power for their most destructive spells.[1]

Ikit Claw, the Chief Warlock, is the most able Warlock Engineer.[2b]