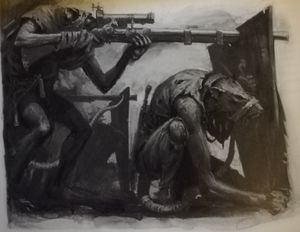 A Warplock Jezzail requires a team of two to operate effectively, one armed with the Jezzail and the other propping up a heavy shield used to rest the gun barrel on, the shield also providing cover for the team. They are often positioned on high ground or tall structures to snipe at enemies from a secure distance.[1a][3]

Warpstone plays a major part in the operation of the weapon, appearing in the bullet, the firing mechanism (the warplock), and the warpstone-laced gunpowder. [3]

The Jezzail's unusually long barrel gives the weapon a range unsurpassed by other handguns. The high velocity of the warpstone bullet strikes with enough force to easily punch through shields and heavy armour, and the poisonous nature of the warpstone makes any damage inflicted all the more grievous. Bullets fired by the Jezzail leave a faint green trail, which allows the enemy to trace the shots back to their source and return fire. As this makes Jezzail teams especially vulnerable, the traditional gun rest of the Jezzail has been developed into a large shield.[3]

Besides the Jezzail and the Shield, the crew carry Hand Weapons and may be protected by Light Armour.[1b]