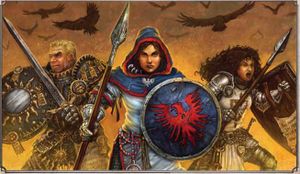 Warrior Priests of the Empire

In ancient times, the Warrior Priests of Mahrak were famous for their strength and power. [2a] Following the destruction of the Covenant with the Gods by Nagash, a new force was created in -1400 IC - the Hurusanni (Devoted), basing their weapons and training on the Ushabti. They fought at the Siege of Lahmia in -1200 IC under king Alcadizzar. [3a]

During the crusades of the 1450s (Imperial Calendar) many of the Empire’s holy fighting orders were formed including the Knights of the Blazing Sun, noble warriors who adopted Myrmidia as their patron deity after she granted them a momentous victory in a battle fought around her temple. [1a]