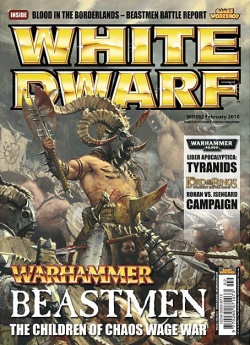 White Dwarf (sometimes shortened to WD) is the monthly magazine produced by Games Workshop. The first issue was published in June-July 1977 as a bimonthly magazine. In August 1982 it changed to a monthly release. In the present day White Dwarf covers the three 'core' games systems produced by Games Workshop: Warhammer 40,000, The Lord of the Rings Strategy Battle Game and Warhammer Fantasy. White Dwarf is produced in a number of countries in several languages, with the UK edition considered the 'mother' edition.

Issue 1 of White Dwarf was published in June-July 1977. It was in black and white, had only 24 pages, was bi-monthly, had many advertisements for obscure non-Games Workshop games and had no pictures of miniatures. During this time Dungeons & Dragons was the main focus of the magazine. In August 1982 the magazine became monthly and the first Warhammer article was published in White Dwarf 45 (UK) in September 1983, shortly after the release of the 1st edition rulebook.1 p.61

The last issue to be bound by staples was White Dwarf 89 (UK). Subsequent issues were now free to increase the page count. By this time the focus was beginning to switch to miniatures, with the few colour pages dedicated to pictures of Citadel miniatures. After White Dwarf 100 (UK) non-Games Workshop material disappeared from the magazine and a Games Workshop logo was added to the front cover. This could be considered the birth of modern White Dwarf - an in-house publication for Games Workshop and its miniatures.1 pp.62-63

Warning - the classification of these White Dwarfs may not be 100% accurate. If you see a mistake, please feel free to rectify it by editing the page