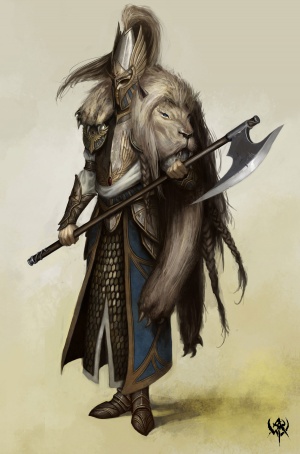 White Lions are powerfully built elf hunter who protect the lands of the Inner Sea and some of whom serve as bodygaurds to the Phoenix King. [1b]

The Elves of Ulthuan's northern kingdoms are a hardy, self-sufficient folk; they live in the wilds of the northernmost coast of Ulthuan. The land of Chrace is a bulwark against invasion and hunters prowl the woodlands for Dark Elf raiding parties, spies and assassins. It was one such hunting party that saved Caledor I from certain doom at the hand of an assassin's blade. While he was out hunting in the forests of Chrace, he received news that he was to become the new Phoenix King. As he made his way to the Shrine of Asuryan, a Dark Elf assassin leaped from the forest and attacked him. As they dueled, the woodsmen nearby came to his aid, cutting down the assassin with their axes. Caledor recognised their courage, and made them into the Phoenix King's personal retinue. [1a]

These hunters became known as "White Lions" for their fierceness and courage in battle, and for the pelts earned by slaying a great Chracian White Lion in single combat.[1a] Deeply attuned to the natural world, the Chracian hunters do not kill the white lions out of hand, and the greatest of their order have been known to raise a cub into a powerful War Lion trained to savage their foes on the field of battle. [2b]

They are expert woodsmen, only matched by their Wood Elf kinfolk. [3a]