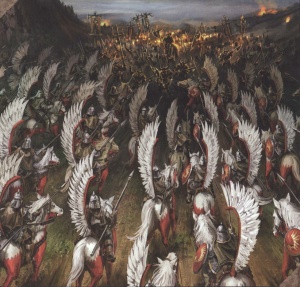 A massed charge of Winged Lancers

Winged Lancers are elite cavalry forming part of the army of Kislev. [1]

In the white, limestone caves of Zamak Spayenya are many primitive paintings which depict hunting scenes with stylised animals, the prey including bear, deer, elk and horses. The hunters are great, winged centaurs but some some Kislevite scholars believe these are actually the Scythians who once inhabited the oblast, but equally others argue that the Scythians were actually Humans who used centaurs as a metaphor to show man and horse were inseparable.[2c]

They are Gospodar warrior noblemen and can trace their lineage back to the original Gospodar knights who rode across the Worlds Edge Mountains from the east. They wear characteristically exotically decorated armour and carry tall lances. They are named after the wings they wear on their back which give them their distinctive and impressive appearance, and which emit a terrifying shriek when they charge into battle.[1][3a]

They form the bulk of the Kislev cavalry, being midway between the light Ungol Horse Archers and the heavier Gryphon Legion. Winged Lancers are fielded in regiments called "Rotas", which are made up of Gospodar soldiers from a single village/area, and most villages maintain at least one rota for defence and to aid others when called. Winged Lancers from local villages are not full time paid professional soldiers, nevertheless they still form the bulk of the Kislevite military and are renouned across the Old World. While lances are used on the charge, swords are also carried for close quarter combat. [2b]

Riders of the Dead

Every year in the Spring, each Gospodar settlement raises a rota of winged lancers where eager young men muster alongside veterans and to the sound of weeping womenfolk, they ride out with their winged banners fluttering behind them. Until their return, they are known as the “Riders of the Dead,” mourned as if already deceased. Every rota has a different character, some are like Imperial knights with colourful pennants, intricately decorated armour, and great animal pelts whilst lancers from beyond the Lynsk are more akin to Ungol nomads with heavy moustaches, top-knots, and fur-lined charms to ward against evil. [2c]