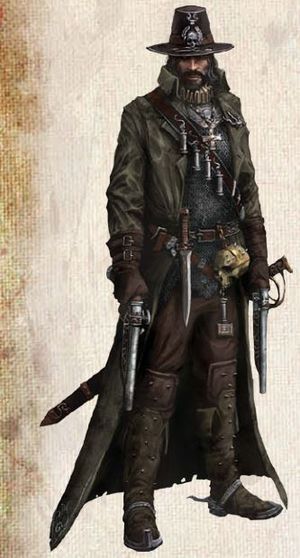 A Wtich Hunter of the Empire

Witch Hunters is the common name for the Order of the Templars of Sigmar.

Wolfgart Krieger founded the Order of the Silver Hammer in -30 IC, appointed by Sigmar to defend his realm against all kinds of magic. Wolfenburg, the capital of Ostland is named after Wolfgart.

Later, in 1682 IC, the Order was renamed as The Holy Order of the Templars of Sigmar, when the Grand Theogonist Siebold II publicly tasked the order with defending the Empire from Chaos, daemons, heresy and magic. This was the first time citizens of the Empire were made aware of the Order's existence.[1a]

The headquarters of the Witch Hunter Order is the Great Temple of Sigmar in Altdorf (not to be confused with the Cathedral of Sigmar nearby). The Great Temple was built in 1220 IC and contains space to house many Witch Hunters, with areas to train the body soul and mind as well as go about the administrative and political running of the order.[1x]

The Witch Hunters thrive on old tomes of law and lore. Many are listed below:

In Liebstein's Handbook, the hierarchy of the Order is detailed, or at least so much as a Witch Hunter would be permitted to know of his own secretive Order[1d]:

Slightly in the past of the Old World, The Witch Hunters descended on the ruined city of Mordheim like the torch-wielding fanatics that they are. The Grand Theogonist commanded the Witch Hunters to go and recover the wyrdstone for Sigmar’s temple, and to kill anyone that stood in their way, including the Sisters of Sigmar - a warrior convent who could predict the future (like witches). The Captains of each Witch Hunter warband possessed an edict from the Grand Theogonist giving them divine right to proclaim heresy and snuff out the lives of anyone who might stand in their way. A Captain would often be accompanied by other Witch Hunters, a Sigmarite Warrior Priest and trained warhounds as well as an unruly mob of fanatics which may include crazed and deadly flagellants.[2]

In The Wasteland, all Witch Hunters are required to be licensed and there are clear guidelines for the conduct of witch trials. Consequently many Witch Hunters operating in the city seek their prey covertly. [10a]