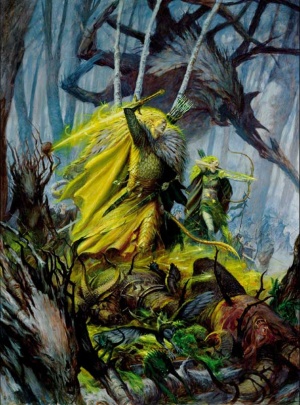 Wood Elves fighting against the Beastmen, their arch-enemies.

The Wood Elves, who call themselves Asrai, are descendants of High Elves who chose to remain in the Old World living in the forest-kingdom of Athel Loren. They have been likened to a force of nature, neither truly good nor evil; Athel Loren and the Wood Elves are far removed from simple comparison with the values held by other races.

The Wood Elves are separated into numerous kindreds and kinbands each presided over by Elven nobles. Each kinband holds separate views and ideologies, so feuds naturally occur between the elves. They all however pay homage to Orion, the avatar of Kurnous, and Ariel, the avatar of Isha, King and Queen of Athel Loren.

Being essentially isolationists, the Wood Elves care precious little for the surrounding human realms. However realising that these realms fight against their shared enemies they help them on occasion. As a consequence the Wood Elves have established an alliance with Bretonnia. In IC 1601 the High Elves attempted a rapprochement with the Wood Elves, but Ariel refused to forge closer ties with the High Elf court. The Wood Elves are also locked in a centuries long conflict with the Beastmen known as The Secret War.

Technically a part of the kingdom of Bretonnia, the Forest of Loren is the only domain of the Wood Elves and is de facto an independent realm.

The Wood Elves generally seem to live a peaceful existence within their forest home, but are constantly prepared to fend off invaders and raiders. They are a secretive people and wary of all outsiders and intruders. They live within kinbands of varying sizes, each have different ideological views so arguments and disputes are common, but they all have a common cause in sustaining and protecting their home, and preserving the balance of nature.

The Wood Elves mainly worship Kurnous and Isha, but also pay respect to the other Elven gods.

Wood Elf mages are known as Spellsingers. The Wood Elves, like all elves, are able to manipulate the winds of magic with a grace, ease and flair unmatched by any of the younger and cruder races. Wood elf mages practise their own particular fey strand of magic within the bounds of Athel Loren, and tend to follow the path of Isha, the elven goddess of renewal and rebirth. They are adept at creating powerful illusions and glamours, aswell as being masters in the mystical arts of healing and regrowth.

The Glade Guard form the bulk of a Wood Elf army; a deadly core of skilled archers that can often put a foe to flight before the battle has truly joined. The Asrai can often expect the aid of Athel Loren itself in times of war and when the forest-kingdom is threatened. Mighty Forest Spirits march alongside the elves and quickly wipe aside all opposition. However during the winter months the forest-spirits and the forest itself is at its lowest ebb, made dormant and vulnerable through the cycle of the seasons, and at such times the elves can expect little or no help at all from their living home. Should the forest come under attack while the spirits rest, the Eternal Guard are called to hold fast and stand before all foes.

Glade Guard - The Glade Guards forms the very core of Athel Loren's armies. In time of need, every Wood Elf can answer the call to defend their forest home, for all are trained in the arts of the longbow as soon as they can hold one.

Deepwood Scouts - Deepwood Scouts hold the responsibility of patrolling those areas of the forest deemed too dangerous for Glade Guard to enter. To tread such paths, an Elf must be invisible not only to a predator’s sight, but to his other senses also - no easy matter when contending with otherworldly creatures to whom an Elf’s soul manifests as a brightly burning light.

Wildwood Rangers - Wildwood Rangers are those Elves that have suffered a great tragedy by the hands of those entities that live within the Wildwoods, and have thusly dedicated their lives in patrolling that cursed grounds.

Eternal Guard - Using a unique fighting form with deadly swordstaff called saearath, the Eternal Guard will solidly stand against any who threaten Athel Loren. Eternal Guard are frequently utilised as bodyguards for Highborn and other Wood Elven nobility. They are the only ones standing between the enemy and the destruction of the forest during winter time. During other seasons they have a mostly ceremonial role.

Waywatchers - Waywatchers are silent sentinels, the guardians of the paths leading into Athel Loren. They are masters of concealment, and can lie unmoving and unnoticed for days on end before springing an ambush on a startled and unfortunate prey.

Wardancers - Wardancers are the elven equivalent of berserkers—they have no armor, move fluidly, weave 'dances of death' around their opponents, and are immune to both fear and terror. In Wood Elf folklore, Wardancers are treated with the utmost respect.

Dryads - Forest spirits that are the embodiment of nature's duality: Beauty and Ferocity. Dryads will lure intruders off roads and trails, then let their sharp branches and thorns teach the intruder the folly of tresspassing in Athel Loren. Dryads are some of the most capable assault troops in the Wood Elf host, being fast, strong, tough, fear causing and nigh unstoppable.

Tree Kin - Tree Kin is the name given to the spirits of Athel Loren that bond themselves with dead trees to create an abominable, moving tree monster. They are, in essence, lesser forms of Treemen.

Glade Riders - Forming a friendship of trust and understanding with their horses, Glade Riders move swiftly through the forest branches to bring their deadly bows to bear on the less mobile intruders. Glade Riders are capable of both ranged combat and close combat and often provide a curtain force on the front ranks, to delay and channel the intruder into a prepared devastating attack by wardancers, dryads, treekin and treemen.

Sisters of the Thorn - The Sisters of the Thorn are Ariel’s handmaidens. In many ways, they are equal and opposite to the Wild Riders of Kurnous, a sisterhood pledged to sorcery and subtlety where Orion’s equerries know loyalty only to the glory of the hunt. Where the Wild Riders are borne into batde on steeds as reckless as they, the Sisters ride upon Steeds of Isha — mounts whose viciousness lies hidden beneath a graceful aspect.

Wild Riders - The Wild Riders of Kurnous are Orion’s personal guard, each as aggressive and impulsive as he. They are fey and dangerous creatures who are no longer truly the Elves they once were. Now and forever they are a part of the Wild Hunt’s eternal glory.

Glade Lord - Glade Lords, or Highborns are the upper, ruling class of Elven society. They lead the Wood Elves in time of peace, and it is expected of them to be equally capable generals in times of war. They are far more skilled then the average elven foot troop. Highborns (and nobles) can take up special areas of training (called kindreds), which give them various skills and abilities. Most notably, the kindreds include the "Alters," who are characters that have been changed by the forest. They take on the aspects of the creatures of the forest, through which they move as rapidly as cavalry, and when they come upon the intruder they visit it with a torrent of attacks.

Spellweaver - The Lord-level Mage is similar to mages in every other army, though she (female mages are far more attuned to Isha than males are) is limited to choosing spells from the Lore of Life, the Lore of Beasts, or the Wood Elf-specific Lore of Antel Loren- a set of magical skills which allow Spellweaver and Spellsingers to communicate with the forest for a variety of offensive and defensive benefits. Treeman Ancient - Treeman Ancients are the oldest and wisest of the treemen that live in Anthel Loren. They are just as large and strong as their brethren, but their knowledge of the past and workings of the Forest give the abilities much stronger than those of the average treeman.

Shadowdancers - Shadowdancers are the closest thing that the Trickster God has to a priesthood, and they are both respected and feared as a result. They, and only they, know all the paths through Athel Loren — indeed, it is said that they tread the paths of the Dream ing Wood as surely as they do the mortal world.

Waystalkers - Waystalkers’ personalities have become entirely submerged by their obsession with stalking prey. They are taciturn and solitary individuals, and they may let years pass between visits to Wood Elf halls. Waystalkers are perfectly at ease within their forest homeland and effortlessly survive by their wits and cunning in the wilds.

Branchwraiths - Branchwraiths are the oldest of the Dryads. They have ever served as the handmaidens to the Ancients of Athel Loren, and attend to the Treemen with a dedication bordering upon the fanatical.

Great Stag - No beast in all of Athel Loren is treasured more than the Great Stag, a creature that the Wood Elves revere as representing the true soul of the forest. Wherever the truth of their nature lies, the Great Stags are unquestionably magical creatures, though they are undoubtedly of a nobler cast than Unicorns.

Unicorn - The Unicorn is an innately magical creatures that serve as either warbeasts or mounts for the Wood Elven hosts. They are magical creatures and thus are attracted to female Spellweavers like moths to a flame.

Great Eagle - A Great Eagle is just that — an eagle of epic proportions. They live in the Grey Mountains, or on the very hightest treetops of Athel Loren and have a special connection with elves. Wood elves use eagles as deadly flying monsters. Some heroes of the Wood Elf race are even known to ride them to battle.

Treemen - Treemen are the most powerful spirits in Athel Loren. They, unlike Tree Kin, are permanently bound to a living tree, making a connection that only death can sever. Also, Treemen are ancient beings - some are old beyond mortal reckoning- of gigantic size and have many abilities that Tree Kin do not. One example is the mystical power of tree-singing, which can enable trees to walk or attack nearby enemies.

Forest Dragons - Forest Dragons are mighty serpentine beasts that dwell within the enchanted woodlands of Athel Loren. Protected by the forest canopy and shielded from the attentions of young heroes seeking to make names for themselves by the sheer rock faces of the chasms, these Forest Dragons thrived and multiplied.