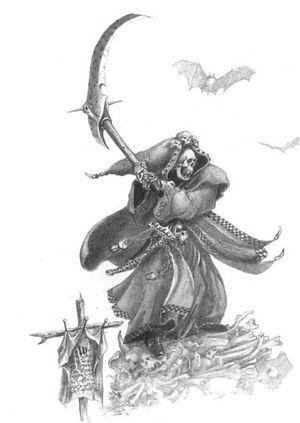 Those who practice dark magic face many terrible dangers. Some try to extend their lives for decades or even centuries beyond their natural span. Sometimes they succeed, and the individual retains his physical body and mental powers, but more often the result is far more horrible than death itself. Age and the continual use of dark magic drains the soul and withers the body, until only an insubstantial husk remains, deprived of its substance and driven by a mind twisted by its most hideous fears.[1a][3a][5a]

Such cursed creatures are called Wraiths. Once they were great men, wizards of considerable power, Necromancers with legions of Undead at their command, but now they are just shadows held between life and death by their own desire for immortality. Their cloaks give them substance, but nothing remains of their physical bodies. Two glowing eldritch eyes glint from beneath their cowls, glimmering with malign knowledge. They are dangerous because their chill touch drains life from living creatures, sucking out the warmth and spirit, driving their victims wild with terror.[1a][3a][5a]

Ancient vampires are aware of the rituals to call forth and bind such powerful undead to their service where they can act as near invulnerable shock troops. Wraiths are ghostly creatures that are notoriously difficult to wound with conventional weapons. As beings of magic, they can be damaged by spells created by the Winds of magic or enchanted weapons.[4a]

Some remain as extremely powerful magic users in their own right meaning that one must be very skilled to best a Wraith in a contest of the arcane.

A wraith carries a Double Handed Weapon - the scythe, a symbol of death for most humans. [1b] Some ride Nightmares with or without Barding but they themselves do not wear armour.[2a][2b] They are able kill with their incorporeal hand - the so called Chill Grasp. [4a]

From their Warhammer 7th Edition army book onwards they were described as Cairn Wraiths and formed units led by a Tomb Banshee. [3a] In 8th ediition they reverted back to being Independent Hero Characters as well as units. [4b]