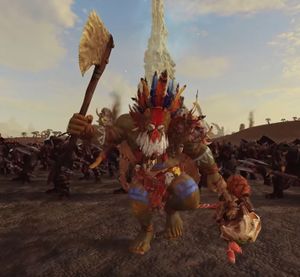 However, he has great vision of the Orcish glory, leading armies to greatness before dissapearing to advance another plan for his kind. Right now, he is searching for the Once and Future Git and he has magic items created by Gork and Mork themselves to aid him.1,2

As a young pup he was targeted by the shaman of his tribe, Old Wizzbang who did not want any young rivals and exiled to the depths of the Jungle. Although it was expected he would be quickly eaten, he survivied and grew in magical power and muscle, wandering through the trees, guided by strange visions. [1a]

Finally he found an old ruined orc fort where a glowing green shaman appeared in a wooden mask. He was told that Gork and Mork had cohsen him to seek out the Once and Future Git who would draw his axe from the Gaffastone, also in the ruins. The vision gave him his magical staff to aid him in his quest. [1a]

He returned to the Bone Nose Tribe and turned Wizzbang into a large Squig. Choosing the largest Boar from the tribes pens he called on the rest of the tribe to follwo him in his search for Da Git. [1a]

As Morks Favourite he is unable to Miscast. In addition, creatures that normally see Orcs as prey give him a wide berth. [1a]

Unlike most wizards and shamans, Wurrzag doesn't stay at safe distance but charges into combat to blast the enemy with his Waaagh!-driven powers. The enemy wizards who tried to counter his blasts with their sorcery generally degenerate into rapid Squigs, allowing him to proceed unhindered. His abilities are so great that no army involving Wurrzag has known defeat; or at least, no-one has ever heard of one.1