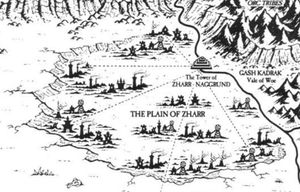 Its name means "Place of Fire and Desolation" in the language of Dwarfs. The city is built of black obsidian in levels to form a great ziggurat; legends have it the ziggurat was not built, but magically carved from a single black mountain thousands of years ago by the most powerful Chaos Dwarf Sorcerers. The lowest ranks of Chaos Dwarf society are found towards the bottom of the ziggurat, while atop the massive stepped structure lies The Temple of Hashut.[1a]

Across this gargantuan industrial city, the Chaos Dwarfs work unceasingly. Huge workshops with mechanical forge hammers work night and day beating out a cacophony of noise that can be heard from many miles away. From all across the city towering chimneys rise to pierce the sky, spilling out their black smoke and covering the lands in a perpetual choking darkness. Hundreds of ziggurats built from black obsidian stretch out as far as the eye can see, each illuminated ominously by flaming torches.[1a]

The four gates of the city, one on each side of the ziggurat, are immense beyond any practical need, bound with iron and stretching up to the battlements on the steps of the vast pyramid, which bristle with arcane engines of destruction and pierce the tortured sky like fangs. Traveling towards the centre of the city and the Temple of Hashut the Chaos Dwarfs have built two roads paved with slabs of gold and brass, aligned east and west to the points of a compass. Each passes over several bridges, under which the Chaos Dwarfs use a network of roads and steam wagons to live and work. From the northern gateway the River Ruin passes through, cooling forges throughout the city and carrying other waste out the southern gateway.[1a]

The road to Zharr-Naggrund is lined with strange statues, which are actually Chaos Dwarf Sorcerers whose bodies have turned to stone after a lifetime of using their dark brand of magic.[1a]