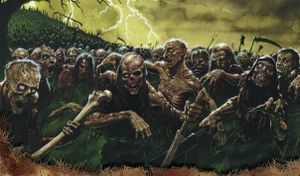 A massed horde of Zombies.

Zombies are shambling horrors that stagger towards the enemy battle line in a noisome horde. Grotesquely reanimated corpses, they are compelled by the Dark Magic of a Vampire or Necromancer, and driven by the will of their master to commit acts of extreme violence. [1a][5a]

Zombies are foul to behold with terrible balefire burning in their putrefying eyes. Their bodies are rotting and torn beyond the limits of sanity. The evidence of their violent deaths is clear for all to see, and their unclean flesh is blotched with rot and riddled with vermin, maggots and worms. A Zombie's skin hangs in strips from his tattered frame, revealing withered muscle and bloodless veins. Broken legs propel them onward with lurching strides and twisted fingers clutch hungrily at their victims. Yet Zombies are often made from more than corpses, for when the Vampire Counts are on the warpath, their Necromancers are often forced to improvise in order to amass a truly unstoppable horde. [3a][5a]

Spiked and rusting railings from graveyard fences are substituted for missing limbs; broken backs are buttressed by mouldering planks or hammered into a semblance of solidity with rusted coffin nails . Fingers hacked off by wild sword thrusts are replaced with jagged spikes and Elven arrowheads . Any debilitating wound they suffer is compensated for with stomach-churning expediency, for all that a Zombie's masters require of it is to stumble into battle.[5a]

For all their horrific appearance, Zombies are slow and clumsy, making it easy for local militia and adventuring warbands to destroy individuals or even to bring down small groups. Unfortunately for the innocent folks sleeping fitfully in their fortified towns and villages, the Old World boasts a rich supply of corpses, and thus Zombies can be raised and set loose upon the living in overwhelming numbers.[5a]

All fear the witching hour, when a tide of groaning, clawing Undead batters down sturdy wooden gates, or when a crowd of Zombies pile together in order to spill over walls and palisades. When the Chaos moon rises high in the sky and wolf-howls pierce the night air, watch-fires are stoked and holy amulets of Sigmar are clasped a little tighter.

To call the way a Zombie attacks 'fighting', is perhaps to give the foul creature credit beyond its due. These sickening half­ things have no skill to speak of, but are instead driven only by the insatiable urge to rend, kill and consume the living. Any warrior unfortunate enough to be pulled down by a Zombie horde will find himself torn slowly apart by a mass of desperate clawing fingers, his flesh gouged from his body in grisly, glistening chunks. The fortunate die quickly, but those unlucky souls who are trampled beneath the horde spend their death throes in miserable agony as their innards become a crimson feast.[5a]

Soldiers who have met in battle with the Undead before, or who hear the terrifying tales whispered at campfires, know the best methods with which to slay the restless dead. A blow to the skull with a hammer or axe will slay usually a Zombie outright, and severing the head is an even surer method of destruction. But precise strikes such as these take focus and skill, and Zombies are seldom found in ones or twos. Instead, these death-walkers are raised in large numbers, gathering upon the battlefield in their hundreds. Against hordes such as these, even the strongest sword arms tire, the stoutest hearts can falter, and the most skilled blades can become lodged in putrid flesh. Even those of surpassing skill will eventually feel the clammy touch of dead hands upon their skin.[5a]

Zombies are easily sustained by the powers of necromancy, jerking back to their feet like jangling puppets as invisible force swirls around them. Their numbers can seem almost infinite as they press relentlessly forwards, those that fall in battle compelled by necromantic power to stagger or crawl towards the foe moments after being cut down. Such shuffling hordes are often used by Vampires to exhaust the regiments of their enemies, slowly overwhelming the foe in a ceaseless tide of blood-slicked, maggot-ridden flesh.[5a]